My name is Anton Yeryomenko, and these are my memoirs of the 2nd Soviet-Japanese War.

I received command of the 51st Army in November of 1982 for superlative performance in Afghanistan, a place I cannot  soon enough forget. Army wisdom held that the desolate backwater of  Yuzhno-Sakhalinsk, headquarters of the 51st, was where careers went to die. Certainly my dear Tanya had no desire to confine her social circle to a few stuffy Army wives, but a rather inebriated Politburo member hinted that it would not be a peacetime posting for long. The summons to an urgent briefing came during a birthday dinner for my youngest, Anna. My poor rain-soaked Chief of Staff startled the girl, and I could not depart for headquarters until I soothed her. When we arrived, I was faced with news no less startling – we were to invade Japan.

(Strategic map of our area of operations.)

Pouring over the maps with my staff, cups of strong Army tea in hand, the magnitude of our task became clear. We were faced with 5 primary objectives; the airfields at Totorri, Gobo, Hiroshima, Nagasaki, and Kanoya. We would be given the assistance of the Red Fleet in the Minsk and Kuznetsov, several VVS squadrons, and the 98th Guards Airborne Division.

Opposing us would be the numerous ground forces of Japan, the inevitable air and ground forces sent in by the Americans, as well as the sheer size of our battlefield. Initial drops to secure the northern half of Japan would only guarantee us the province of Osaka to use as our jumping off point, further harbors would have to be secured ourselves.

My initial plans were clear – due to its proximity to our VDV forces and Minsk, our first attacks would focus towards seizing the airfield at Totorri. Launching from Minsk, Colonel Gordunov’s helicopters would seize the port at Kytakyushu, as this would allow for armor to be deployed more easily to the southern islands. Luckily, the Red Fleet agreed with my concerns about the southern flank, and Kuznetsov would move on station as soon as fighting began. The 9th Guards Motor Rifle Regiment would remain at Osaka to rest and refit from their early fighting and to protect the port there. My staff and headquarters would relocate there as soon as possible. 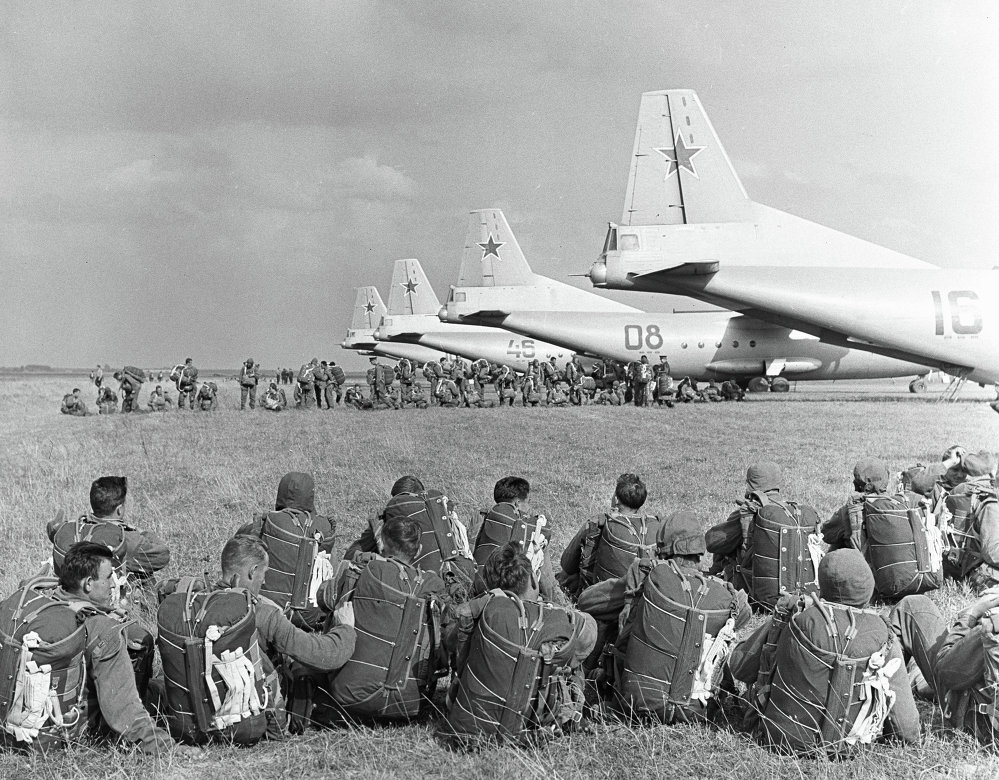 (Pravda photo of VDV troops preparing to embark on AN-12 transports.)

With their orders set, I shared a few phone calls with the frontline commanders, and wrote a letter to Tanya. Eternal minutes ticked closer to midnight and jet engines began to roar down the runway before the signal we were all awaiting came in – “Climb Mount Narodnaia”. Our war began.

(Our initial dispositions on the first day’s fighting.)

Operations began smoothly. Our comrades in the VVS swept the skies over Tottori long enough for the VDV to drop without any issues, and the Minsk was able to engage the RoK fleet far away from our landing operations. The 390th Naval Infantry Regiment went ashore at Obama, and the 106th at Masuda. If things went according to plan, they would link up with the VDV boys and kick down the doors at Tottori before the Japanese knew what was happening.

(Where We Are, There is Victory! The Naval Infantry enter the fray.)

Following standard doctrine, the armored forces of the two Regiments landed first, and proceeded quickly to seize a beachhead. Meanwhile, the corvettes moved in close, prepared to lend their gunfire as support. This proved wise; the Japanese commanders gambled on a lightning strike to crush our forces as they landed. Wave after wave of brave warriors threw themselves into the face of our guns, but our line held.

(As yet more forces are brought ashore, the back of the Japanese assault is broken.)

(A fight to the last – the Japanese command post is overwhelmed.)

With the majority of their forces smashed by naval gunfire, the tanks of the 390th were able to advance unopposed, overrunning the Japanese rear areas within the hour. A gleeful Party official congratulated the men of the Regiment, and a photo of a burly Marine, kalash in hand and prisoners in tow, would soon grace many a newspaper.

(War is a bitter teacher, and the Japanese refused to learn.)

The 106th’s landing at Masuda was no less successful. Though they were given no landing vehicles capable of dropping tanks directly onto the beach, the urban nature of Masuda meant they could easily withstand the inevitable Japanese response.

(“The Bullet is Foolish, the Bullet Wise.” – Suvorov)

Those few Japanese who managed to run the gauntlet of offshore support found themselves engaged at close range by elite troops, plying rifles and RPGs against shellshocked targets. Anecdotes and rumors abounded of a Japanese platoon, cornered in a city block, run down by a bayonet charge.

As the firefights in the city reached their bloody conclusion, our forces swept out to eliminate the few remaining pockets of resistance. With both Masuda and Obama taken, the bulk of our forces on the ground headed towards Tottori, hoping to reach the paratroopers in time. Fate, however, was not on our side.

(CO of the 331st VDV Regiment, Vladimir Shamanov, with his staff. All those pictured died at Tottori.)

The first day’s fighting at Tottori shall go down in history as one of my greatest failures, and as the finest hour of the VDV.  It was my assumption that the Japanese armored forces in the vicinity of Tottori would take at least 12 hours to man their vehicles and mobilize, enough time for the Naval Infantry to move in from the beaches and unite with the VDV to seize the airfield. Our Japanese foes did it in 3 hours.

(“Nobody, but us!” The 98th Guards Airborne Division makes its desperate stand outside of Tottori.)

The bulk of the VDV gathered into a small town on the outskirts of Tottori, and positioned their meager ATGMs into the best fields of fire. Steely eyed gunners resolved to take as many Imperialist foes with them, knowing their comrades raced to their aid.

The slaughter was immense. In the end, with heavy casualties, the VDV barely held, but hold they did. The Naval Infantry finally reached their positions, moving at breakneck pace over the Japanese countryside, only to find defiant VDV troopers cheering the latecomers on.

(The Glories of the Red Fleet – Stoykiy at sea.)

Meanwhile, our comrades in the fleet had not been idle. While Minsk remained close at hand to provide air support, the Sovremennyy destroyers of the task force dashed forward to engage the Korean forces nearing the landing zones.

To me, all naval warfare seems a keen mixture of boredom and terror. The two Sovremenny destroyers sat in ambush, waiting until their comrades could arrive to ambush the approaching Koreans. In a flurry of Moskit missiles, the Hatsuyuki‘s were sent to the bottom. Their losses were so heavy that they retreated, broken by the strength of the Red Fleet.

(Over the Islands Helicopters Circle.)

The Japanese recognized the importance of Kytakyushu, and what its port meant for our operations. They reinforced the area with elite attack helicopter squadrons, OH-1 Ninjas and AH-1 Cobras, with determined infantry dug deep into their holes.

Unfortunately for them, Gordunov’s men were hardened Afgantsy, and had blasted much fiercer men from far deeper holes before.

(Gordunov’s Krokodils flying over the wreck of a Japanese OH-1. He later told me they were the most enjoyable opponents of his life.)

Stripped of their air cover, the Japanese infantry forces were exposed and defenseless. Panicking, they attempted a withdrawal to a more defensible urban area, and were caught in the open. Though munitions expenditures were high, far higher than my staff had planned for, the enemy was cut to pieces. So rapid was the victory that the first follow-on infantry forces did not arrive to collect the prisoners for a full 8 hours.

(Tottori Falls – A VDV trooper digs in to repel the Japanese counterattack.)

With their forces combined, the Naval Infantry and VDV set out to clear the remaining areas of Tottori, and bring the airfield online. Just as the air traffic control tower was cleared of its frightened staff, outlying pickets reported that they were in contact. The Japanese armor hadn’t been as soundly crushed as believed, and they were spoiling for a fight.

(Naval Infantry and VDV forces set up a combined firebase along the enemy route of advance.)

Fortunately, the Naval Infantry brought with them ample ATGMs of their own, as well as numerous mortars and a precious few tanks. Relying on much the same tactics as before, the Japanese would be picked off and destroyed.

Our outlying pickets were the first to be hit by the counterattack. They had excellent fields of fire, and sufficient ammunition, but the sheer weight of the Japanese advance, at least Battalion in size, forced them to break contact and retreat, lest they be surrounded and broken.

(Dismounted VDV clear the outskirts of Tottori of an infiltrated Japanese company.)

Our boys were hard pressed by the Japanese reliance on MLRS batteries. They seemed almost unbelievably accurate and quick to fire, and many a platoon was forced to ground by their rockets. An audible cheer went up along the front when news that their artillery had been destroyed was radioed in.

As the dust settled over Tottori, the first VVS squadrons winged in to land. By nightfall, streams of fat transports arrived, carrying troops and supplies to reinforce the front. Back at Osaka, my command staff toasted our first victory, as we planned the next phase of action….