Author’s note: This is hopefully the first of a series of 3 articles on the ANZAC contribution to the Vietnam war, and will serve as an overview in preparation of articles oriented more towards ANZAC tactics and operations. Further, whilst the term ANZAC technically applied only to integrated Australian and New Zealander units, it has been taken as a colloquialism for forces from both nations as a whole.

A Prelude to War

Following the French defeat at the hands of the Vietnamese, and the turbulent division of the country in twain, America sought to assist the South and prevent the “domino effect” of further communist expansion. Seeking to involve multiple countries and thus legitimize its efforts, the US reached out to Australia and New Zealand through the terms of the Australia, New Zealand, United States Security (ANZUS) Treaty.  Both countries sought to preserve their ties to the United States, and the Australians to help stem the spread of communism.

The ANZAC commitments began with sending advisers and training contingents to assist the South Vietnamese, the first of which arrived in August of 1962. However, as happened with the Americans, the increasing scale of the insurgency in South Vietnam led to the deployment of combat troops, beginning with 1st Battalion, Royal Australian Regiment (RAR) and 161 Battery, Royal New Zealand Artillery in 1965, and they would see combat by November of that year. 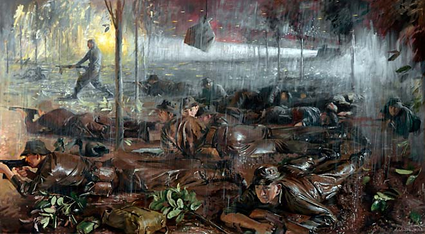 Vietnam was not the first jungle insurgency the ANZACs faced; many had seen service during the Malayan Emergency, and this experience paid dividends in the field. ANZAC units were slower and more cautious than their American counterparts, and consequently masters of patrolling, ambushes, and small-unit actions.

Unfortunately, the small size of the ANZAC contingent, only and the predominance of American doctrine meant these tactical skills went underappreciated, and were unable to change the course of the war. The largest the Australian Task Force ever became was 3 Infantry Battalions, a Squadron each of M113s and Centurions, a SASR detachment, and 3 RAAF squadrons, all focused around the Phuoc Toy province.
Despite its small size, the Australian contingent fought several notable battles, the first being a hard-fought victory by D Coy, 6 RAR over the NVA 275th Regiment at the Battle of Long Tan, August ’66. A search and destroy operation in the eastern Hat Dich area lead to the battle of Suoi Chau Pha a year later, and 1968 would yield the Tet offensive and the battle of Coral-Balmoral, which would be the Australian’s bloodiest engagement with 25 killed in action as they clashed with conventional North Vietnamese units. The battle of Bin Bah in June of 1969 would represent an outlier to the normal conduct of the war, as it was the first and only time the Australians faced fierce house-to-house fighting. The 19 Sept 1971 battle of Nui Le, though inconclusive, would represent the last major battle fought by Australians.

Although both Australia and New Zealand initially enjoyed a great deal of public support for the war, antiwar sentiments began to become increasingly popular between 1967 and 1970. Large anti-war protest marches took place, often including clashes with police, similar to what occurred in America, and opposition governments were able to take power at varying stages in both countries. Eventually, ANZAC troops were withdrawn from Vietnam not due to any defeat on the battlefield, but due to civilian opposition to the war.

An issue particular to Australia which served as a lightning rod for controversy was that of conscription. With troop contributions eventually totaling 61,000, the Australian Government introduced conscription measures in November of 1964. By conscription’s end in Dec 1972, 63,735 men had been drafted, of whom ~200 died in Vietnam. These measures attracted a great deal of protest, and contributed to the lessening of public support for the war. An August 1969 Gallup poll showed that the majority of Australians wished to leave Vietnam, a trend which continued through the war’s close.

Mirroring the steps towards Vietnamization taken by the US, Australia and New Zealand began to withdraw from the Vietnam conflict during the 70s, beginning with 8 RAR’s withdrawal in November of 1970. By January of 1973, Australia had ceased all combat operations, with New Zealand having done so by December of 1971, though embassy guards and advisory units would remain in-country until 1973. They left behind them 521 Australians and 37 New Zealanders dead, the last of whom would not have their remains discovered and returned until 2009.

Briefly examining the ANZAC nations’ war aims, it is evident that the war’s results were mixed. Certainly the fact that Saigon is now Ho Chi Minh City means that the goal to secure South Vietnam as a capitalist, west-align country failed, and the assertion that the war in Vietnam prevented the “Domino effect” is questionable. However, a key motivation for the ANZAC nations, particularly New Zealand (who deployed the bare minimum forces to fulfill their obligations), was to preserve and strengthen ties with the United States, specifically under the AZNUS treaty. In this, though the US would withdraw from Southeast Asia to some degree following the end of the war, the ANZAC nations were largely successful. Unfortunately, much like the contribution of South Korea, the ANZAC role in the Vietnam war has been largely forgotten by the American public, eclipsed by our own traumatic memories of the conflict.