Dying from old age in late 840 CE, Louis the Pious, son of Charlemagne, the Frankish Empire under Charlemagne is split up roughly, and the plans for the peaceful division into three states is thrown into disarray. Warbands and their warlords roam the German Plains and what used to be Gaul, taking what they believe is their birthright. In East Francia, Louis II is struggling to maintain his authority. Louis II was able to defeat his brother Lothair, who declared himself de facto ruler of all three Frankish Kingdoms shortly after in an attempt to grab all 3 kingdoms for himself. However, the meeting to counsel the Treaty of Verdun was never concluded, and Louis II died suddenly of unexpected illness. Seizing the chance, Lothair turned the bulk of his forces West, to engage with his brother, Charles II (also known as Charles the Bald) in a bid to solidify his power there before turning to the now warring factions in East Francia. It is here we find an upstart son of a warlord, Theutrich Wigmar, a Baron’s son with modest holdings centering at Paderborn, on the Lippe River.

With the arrival of Spring and the ability to form a new warband to campaign, Theudric’s father, Richmut, goes on the warpath, determined to loot and pillage, and bring into his retinue the village of Bremburg.  He chooses his route carefully, crossing the Fulda River, and attacking the small settlement just on the other side of the Werra River. His warband numbers some 771 warriors, with a third of that being cavalry. With him are two of his most seasoned commanders, Sir Reynke Ortenberg and Sir Roland Selvig. Each command a retinue of sworn knights, the heavy cavalry their best tool against a township which has a garrison of similar strength. Kilometres to the rear, Sir Rahl Olfsven hunts for grain and foodstuffs to sustain the warband.

At dawn, we find the column of Richmut’s warband moving towards Bremburg. Thus far, their path has been successful, with several small hamlets and outlying villages raided and looted for the few treasures they possess. A good start to what is expected to be a short campaign.

At the head of his column, Richmut guides his own personal House Guard to the front, as the town comes into view several kilometers in front of them. He knows that the local garrison will be there in force and ready to protect, as his scouts had spotted them moving the levies within the town limits.

The core of Richmut’s army is his infantrymen, hardened veterans of the campaign against Lothair’s hordes. They march at the head of the column behind their Baron, as his men make up the vanguard.

Sir Ortenberg’s cavalry make up much of the rearguard, the experienced horse-mounted knights  complement those of Sir Selvig, whose men primarily acted as the scouts for the campaign’s early days.

Fanning out, Richmut orders his bannermen to send their cavalry around the flanks, to prevent stragglers or those fleeing from being able to rally then attack in the later phases of the battle.

The plan Richmut sets forth is as simple as he can make it. Sir Selvig will dismount and lead the infantry up the main road of the town, engaging with them, while one of his senior bannermen takes his retinue around the right flank. Richmut himself will take his band to the right, and pincer the garrison awaiting them in the town square. 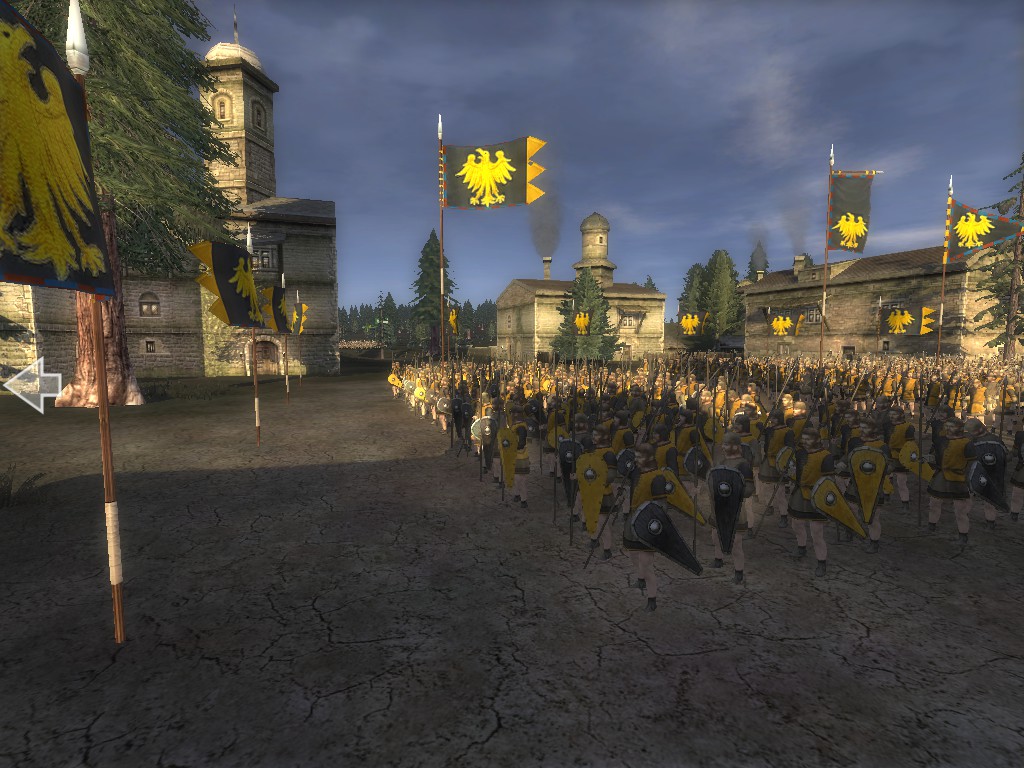 The enemy lies waiting at the city centre. The Bremburg garrison is augmented by much of the farmers and men from surrounding villages, groups of them coming to the town with their pitchforks, spears, and farm tools to defend the city as best they can. Many stayed home on their farms, choosing to bend the knee rather than risk being slaughtered on the streets. 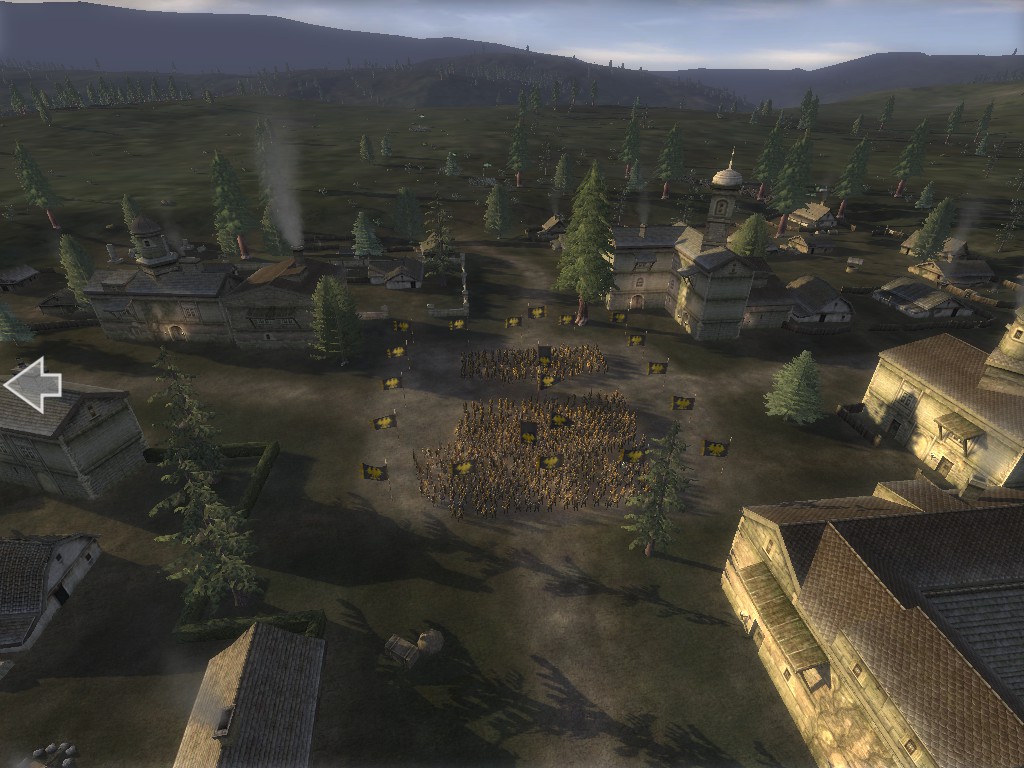 Sir Selvig and the main body of infantry begin their advance into Bremburg. 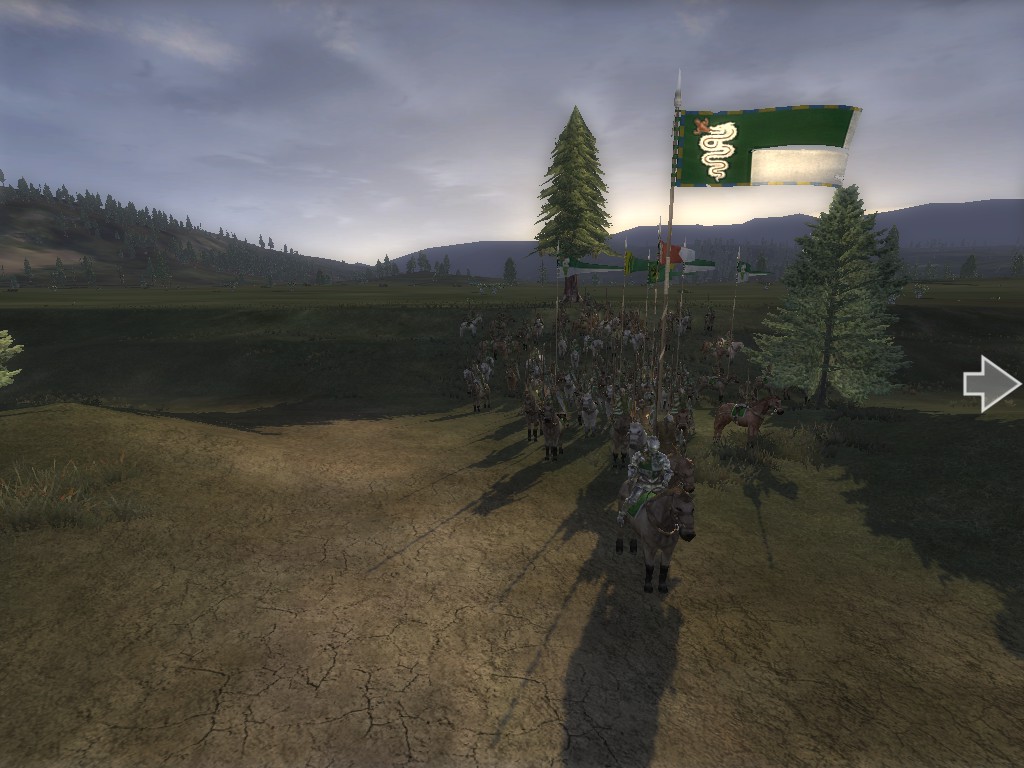 On the flank, Baron Richmut waits patiently for his vassal to engage the enemy before charging his cavalry forward.

The stationary cavalry are excellent targets for the contingent of archers within the town itself and the fire arrows raining down are more of a nuisance than a serious threat.

Selvig and his contingent begin to enter the outskirts of the town.

Their pace quickens. Selvig orders a charge with a cry and the hardened infantry surge forward towards the peasant garrison, bloodlust in their eyes.

The initial engagement is fierce, with the men cutting down the front rank easily, wading through pools of blood, the dirt wet and slick with the entrails and feces of dead men. The Bremburg garrison’s archers do not let up. 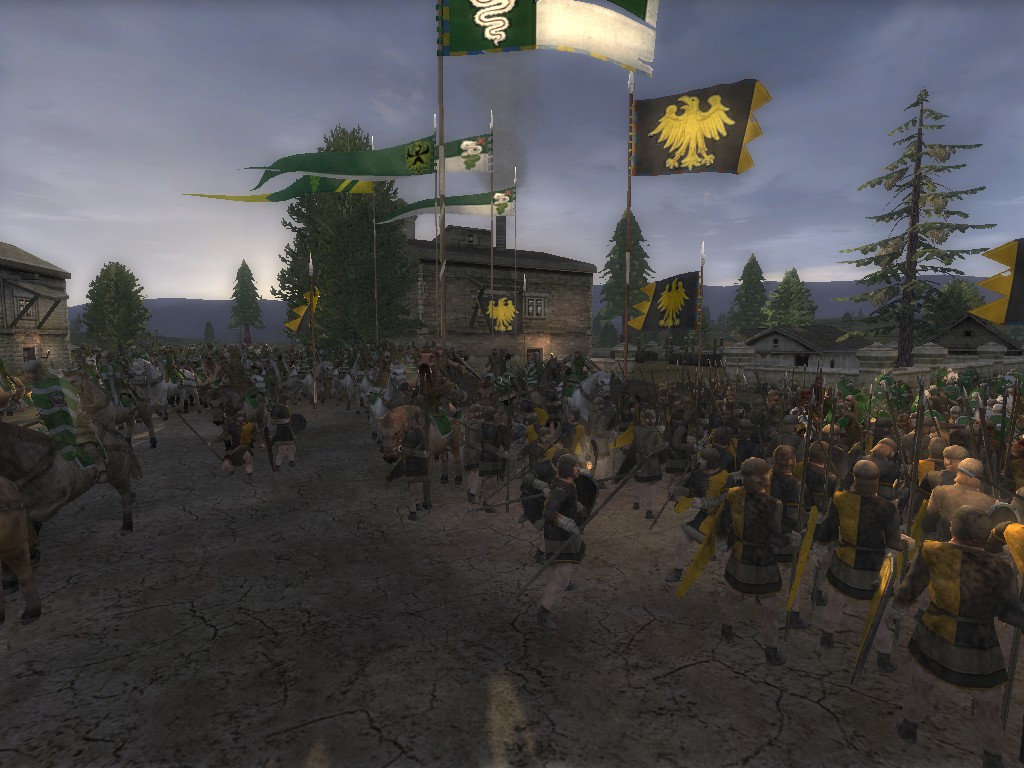 Baron Richmur saw his chance and decided to act decisively, with a great shout he spurred his cavalry forward and thundered down on the relatively unprotected flank of the local garrison. With deep hacks and parries the cavalry drive a wedge into the thinly equipped irregular militia. 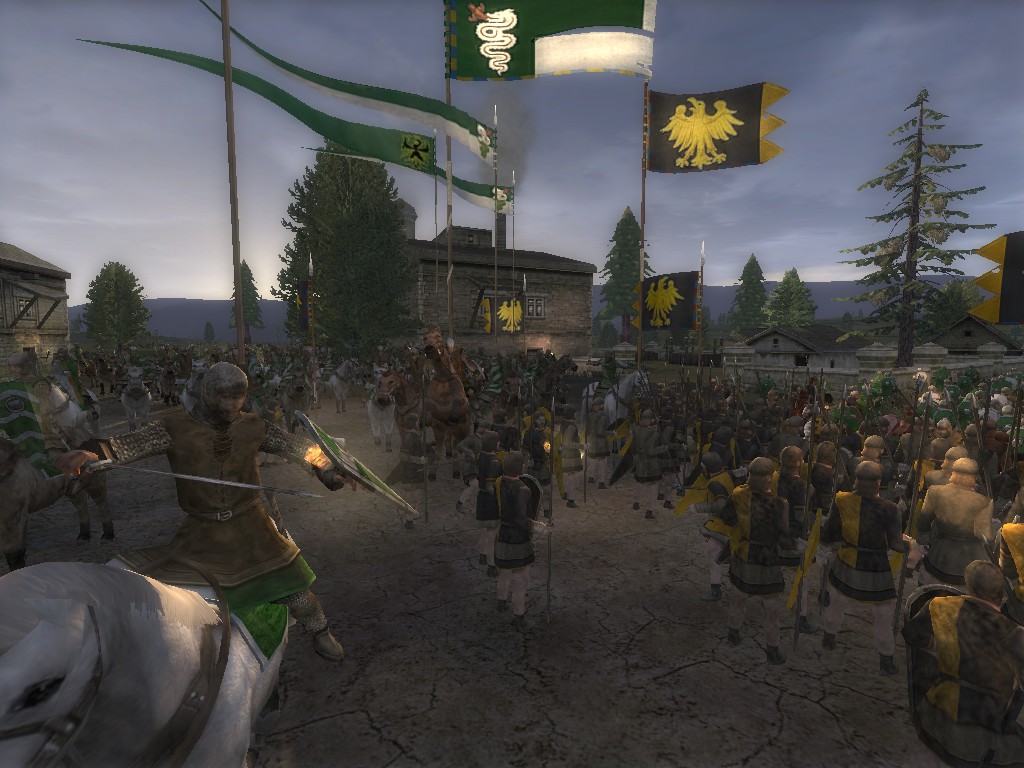 The cavalry drive is so deep, it risks overextending itself to the other side without enough momentum to punch through to enable a wheel and a secondary charge. 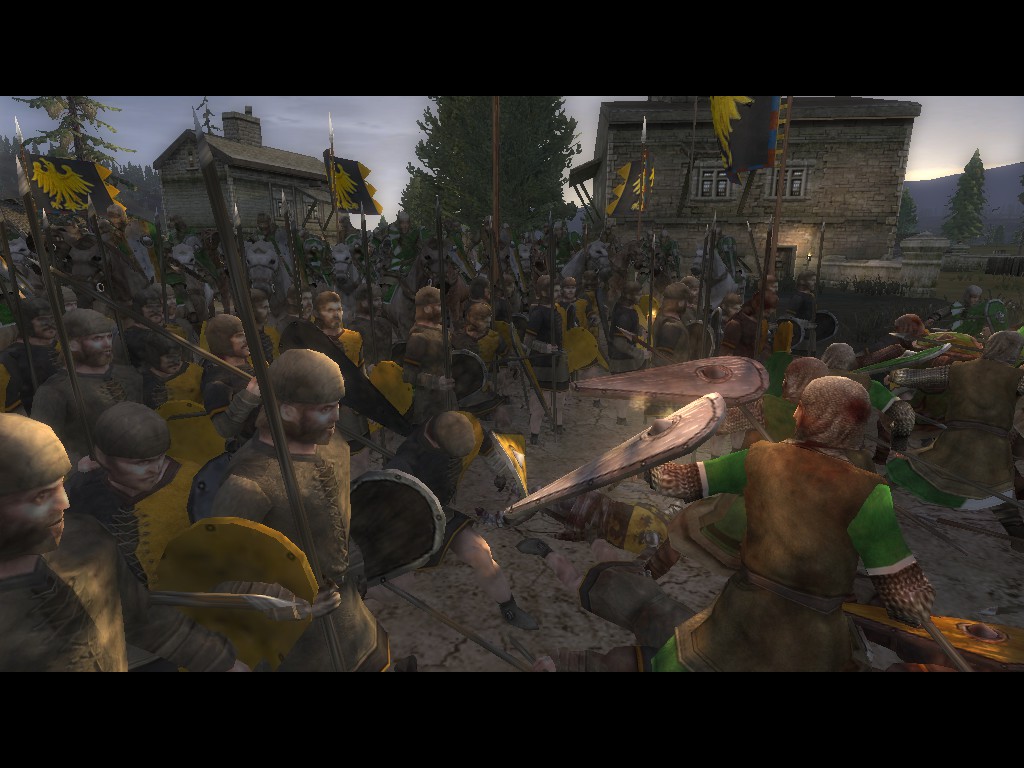 Bloodied, but not broken, the men-at-arms sworn to House Wigmar bear down on the serfs opposite them in the line of battle.

With cavalry enveloping the spear infantry on both sides thanks to a hard charge by Sir Ortenberg, the Bremburg garrison begins to buckle under the weight of the raiding force.

Unphased, the brave footsoldiers slog on, closing with and destroying the enemy despite the hail of fire arrows raking their warband’s lines.

The noose begins to tighten, with cavalry trying to close the pocket on the infantry, Sir Ortenberg leading his men in a determined assault on the scattered spear infantry.

A runner carries a hasty message for Sir Ortenberg, withdraw your cavalry, and encircle the archers, and take them from the rear. A quick cry on the bugle and the heavy horse peels away, moving back to the North of the town to fall upon the archers.

As the battle shifts, the bodies of the fallen are uncovered as the encirclement tightens around the remaining infantrymen now trapped in the square.

And with a great cry, Ortenberg and his retinue crash into the archers, taking them by surprise, driving a deep cut into their number. 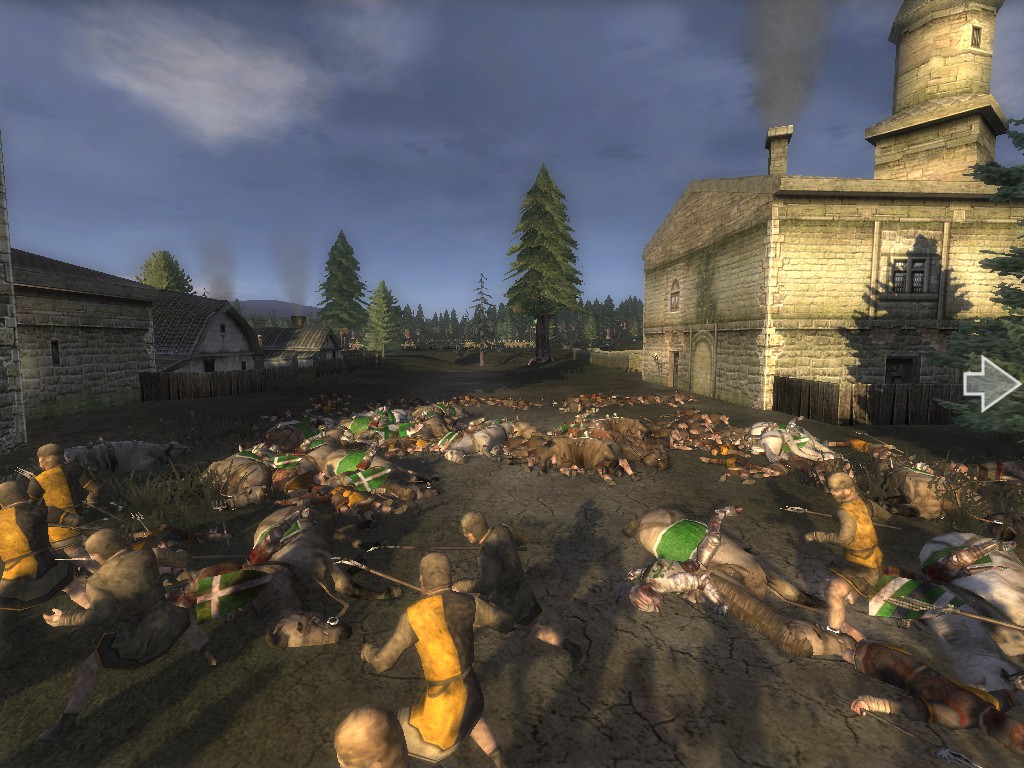 However, as victory and triumph seem nigh, Richmut gets separated from his Household Guard. He is mauled by a half dozen spearmen, their pitchforks and polearms raking his steed, bringing him to the ground. Where, as he lay trapped with his legs underneath his warhorse, his throat was cut, despite his best efforts to defend. 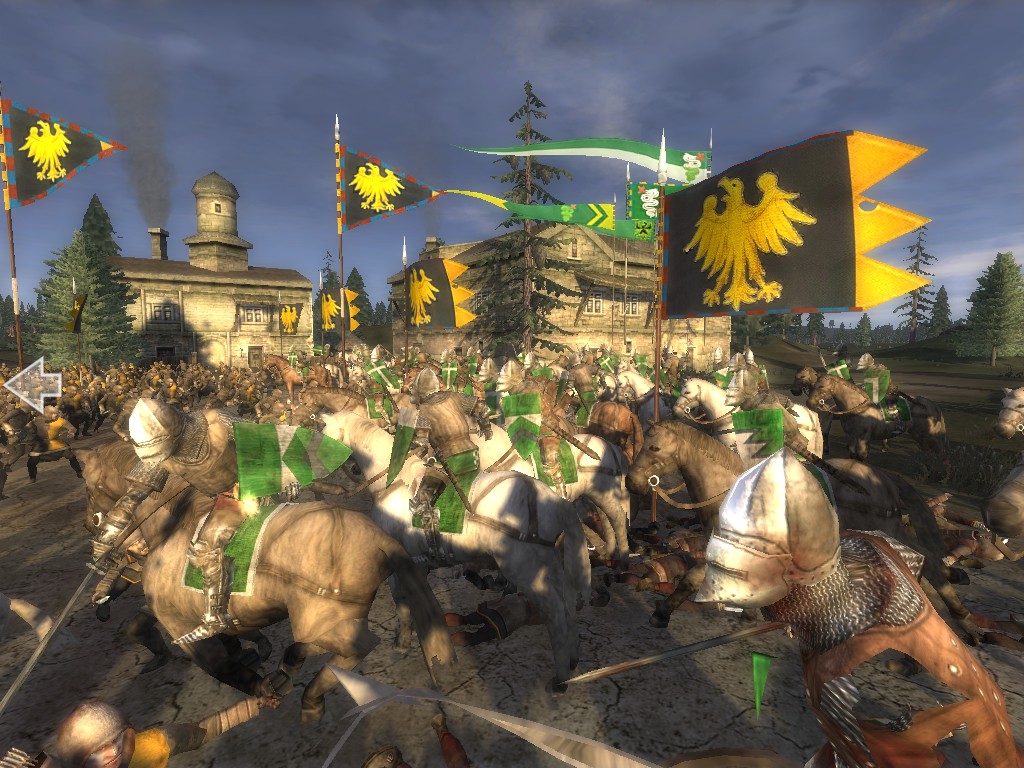 Not knowing the fate of their Baron, the men of Ortenberg’s charge hack at the helpless archers beneath their horses. Pictured, left of frame is Sir Ortenberg himself, cutting down one of said bowmen.

Completely surrounded, the Bremburg garrison begins to panic, unknowing that there is no intent to ransom them as prisoners, as none of them are of the noble blood to be worth keeping alive.

A great shout comes up, as Sir Rahl Olfsven brings his own horse towards the last few Bremburg men left standing. Hearing the commotion from a near distance, he drove his men to the din of battle at a chance to wet his sword again. 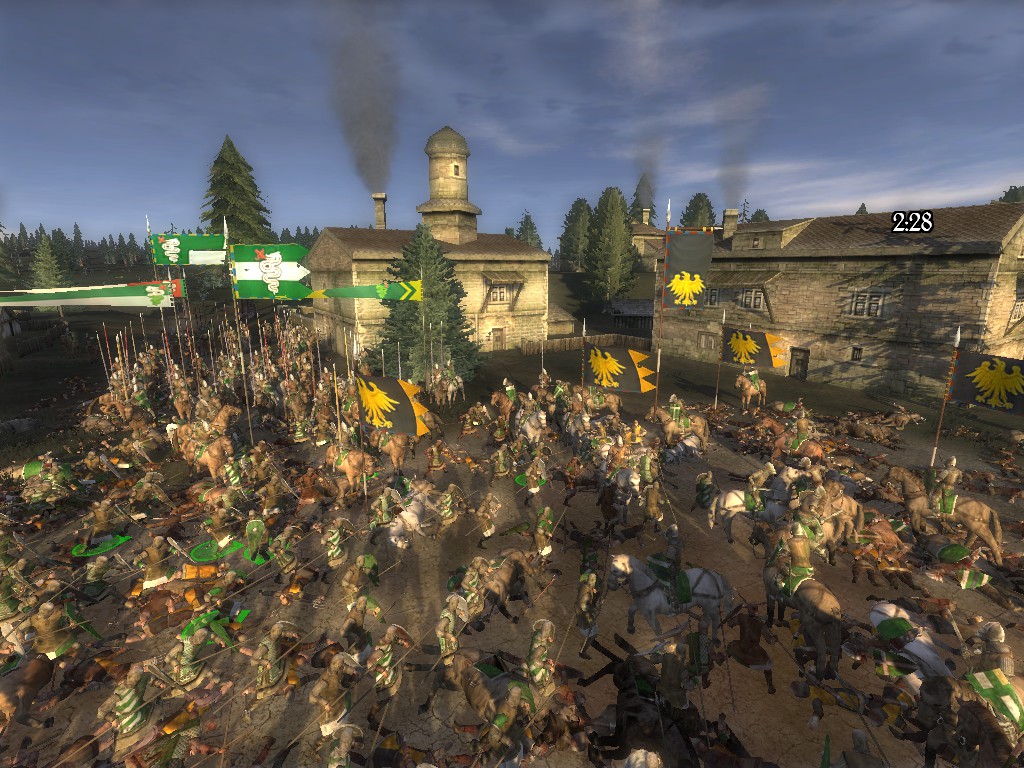 His men  arrive when there is barely a dozen men of Bremburg left standing.

Though the last few attempt to throw their arms down and surrender, the bloodthirsty Wigmar warband cuts through them, adding them to the growing pile of bodies in the town square. 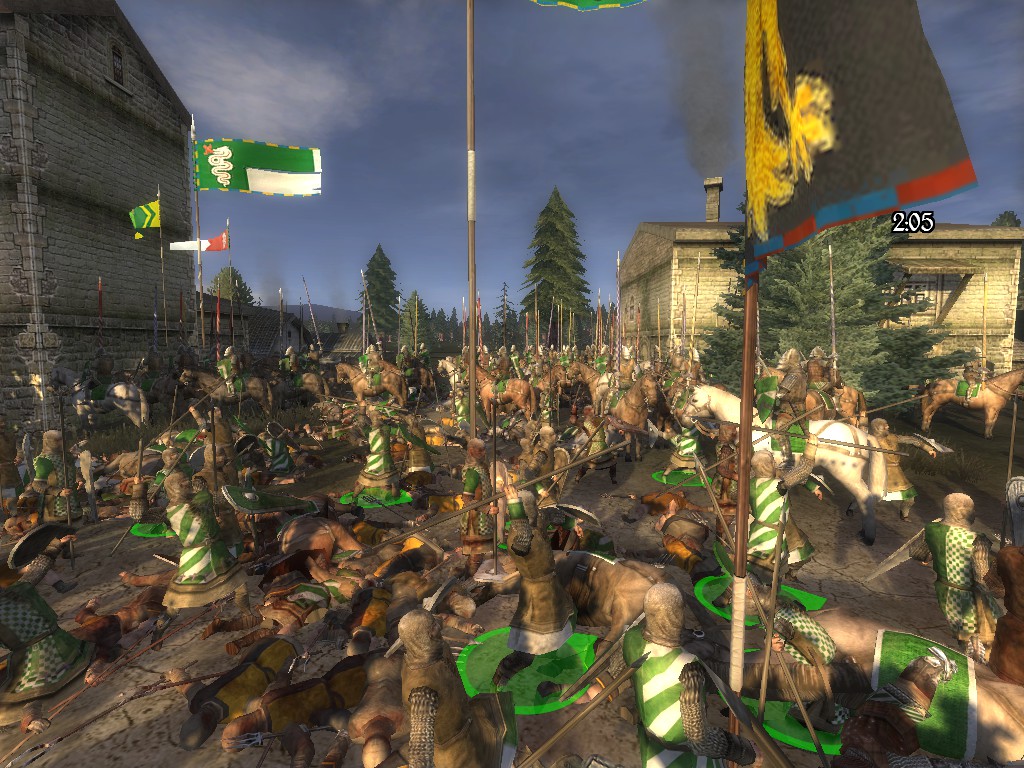 And the battle is concluded, the warband exclaiming their victory loudly, and doors are kicked in as the town is sacked, and slaves dragged off. Of the roughly seven hundred Bremburg men, almost all are slain, with the exception of the wounded and a few archers who managed to escape. However, the head of House Wigmar, Richmut, has fallen in battle alongside nearly two hundred of his own men and knights. They load their body, and then put Bremburg to the torch, razing it as soon as it has been gutted for its worth. 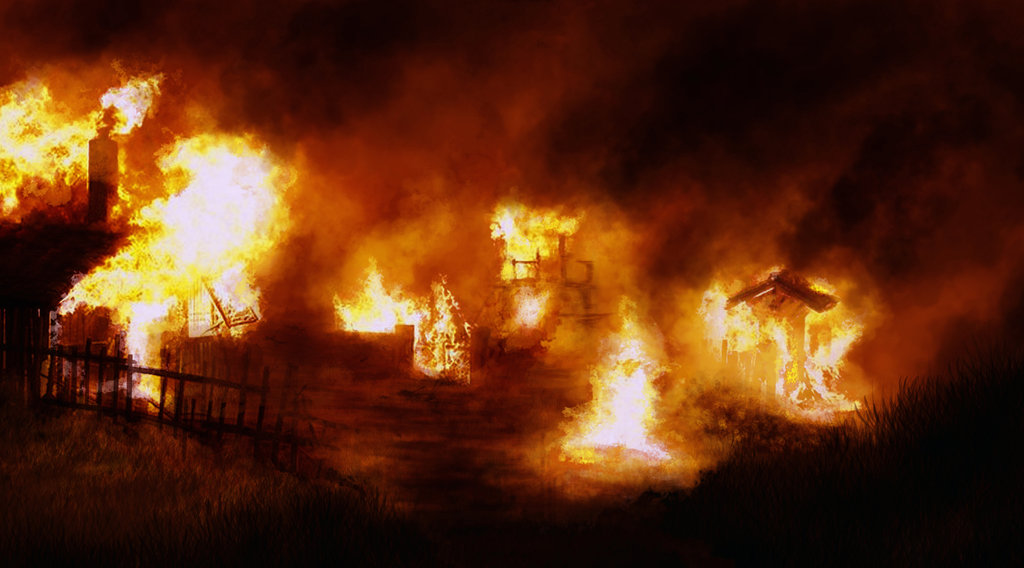 As they ride from the flames, the Warband trudges back towards Paderborn, to inform the young Theudric, yet untested in battle or leadership that he is now their appointed Warlord, and he now wears his father’s title of Baron.

Theudric, upon learning of his father’s passing is distraught. He cannot fathom how such an experienced and mighty warrior could be killed so easily. His resolve is simple, he knows that he must prove his worth as a warrior and leader. He looks to Selvig, Ortenberg, and Olfsven and orders them to make ready for a campaign. The rains of April will give way to a month of raiding for May.

And so Theudric takes aim at domains of Lord Ariminius, to the South.