The Colony in Oldstones has finally been complete. Lord Paramount Ender Bloodbranch has claimed the territory as his own, increasing his demesne from simply Harrenhal to the two provinces. This continues his re-establishment and expansion of the Riverlands. Lord Paramount Bloodbranch has expanded his influence into the Crownlands, gaining power over other Lord Paramounts through a large army.

Lord Paramount Ender has died and as a consequence his nephew, Lord Lennocks Bloodbranch has taken the throne of the Trident. This is the first Lord Bloodbranch with a name that does not start with the traditional ‘E’. He is now in control of the entire Bloodbranch family at the age of 5 years old. His mother will rule as his regent until he is of age.

The Seven Kingdoms mourns the death of King Monford. He died after decades ruling the Seven Kingdoms, decades mostly remembered for unification and few civil wars. His heir now King Morros has risen to rule the Iron Throne. House Bloodbranch is ecstatic since Lord Paramount Lennocks is betrothed to King Morros’ oldest daughter, and barring the birth of a son, Lord Paramount Lennock’s future son will inherit the Iron Throne as a Bloodbranch. 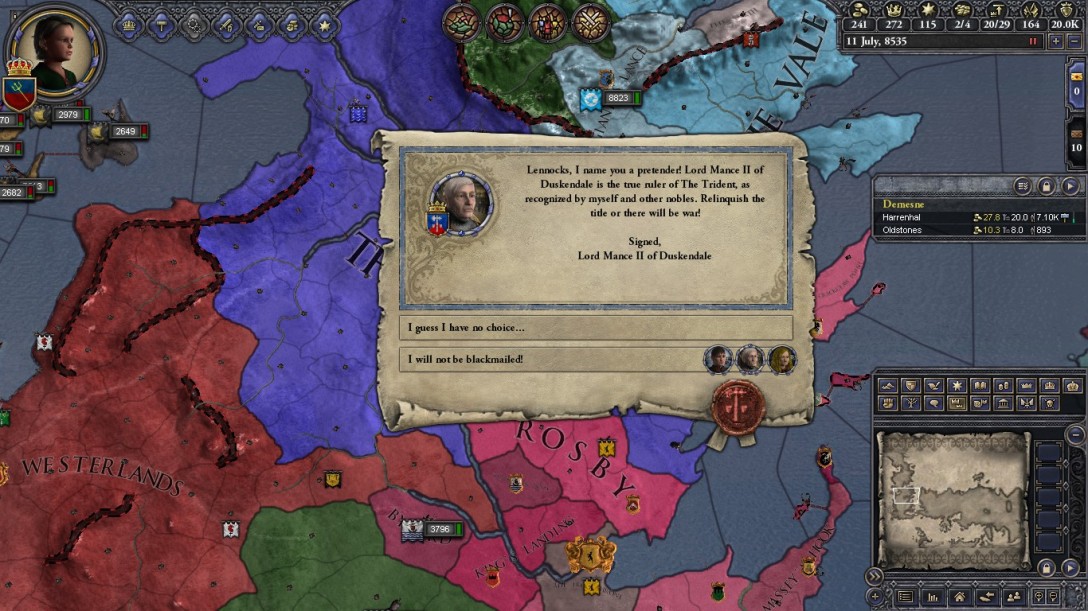 Lord Mance II of Duskendale has declared war against the rule of Lord Paramount Lennocks. This move was not supported by the rest of the Riverlands, meaning Lord Mance II will likely be crushed by the combined the forces of the Trident. However, upon a Wildling revolt, the war ended as the forces of the Riverlands marched north to help crush the Wildling army. The Lordship of Duskendale remains part of the Trident for now, until Lord Mance II decides to declare war again.

New Lords of the Reach:

While the lords of the Trident were marred in a breif civil war, the Lord Paramouncy of the Reach changed hands to House Peake. House Peake usurped the previous Lord Paramounts House Tyrell. This is the first time in centuries that House Tyrell no longer rules the Reach, as more kingdoms switch historical leaders. 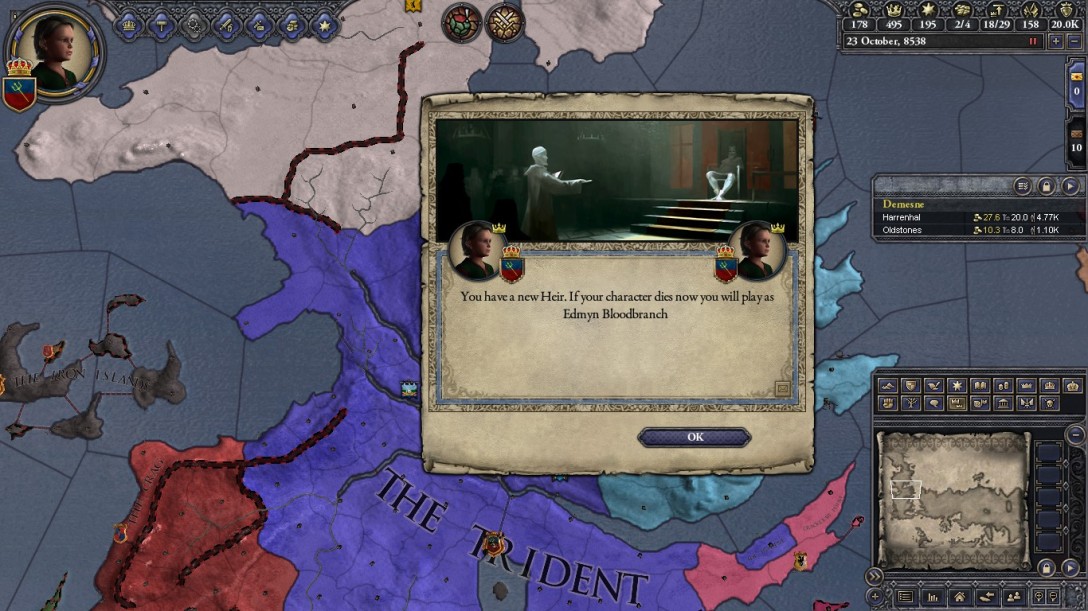 Lord Paramount Lennocks has a brother who is his heir while he remains childless. Lord Edmyn takes after the early leaders of his family as he seems to have giant’s blood resulting in great size and strength. He will surely be an excellent military leader in the future.

Lord Paramount Lennocks has decided to establish a Household guard to ensure the security of the leaders of the family. Furthermore, the Household guard will wear the Bloodbranch family sigil of the black tree with blood red leaves on their breastplate and on their shields.

Treachery from the Throne:

House Swyft, Lords of the Westerlands: