A Colony in the Riverlands:

Lady Paramount Elle ‘The Young’ has decided to use her fortune to colonise he province of Oldstones which has remained ruinous since the wars of conquest. Lady Elle is trying to consolidate her territory following the war against her rule and it seems that colonising the territory of Oldstones would give her more power in the northern provinces of the Trident.

Following the death of King Narbett Baratheon his successor, now King, Monford Baratheon will rule the Seven Kingdoms as King. A younger king, his rule will be marked by his ability to ensure his vassals do not take advantage of his young age in an attempt to declare independence.

Once again a revolt against the rule of Elle Bloodbranch has been defeated. Lord Jaime ‘the Rash’ of Blackwood has managed to live up to his name as he declared a war against house Bloodbranch. Almost as quickly as it started, it ended as Lady Paramount Elle swiftly marched her forces into Blackwood and crushed the rebel army and besieged the castle. She has imprisoned Lord Jaime and it is believed that he will be executed for his treason.

Following his failed revolt Lord Jaime has been executed in Blackwood by Lady Paramount Elle Bloodbranch. Unwilling to travel with her prisoner back to Harrenhal, and also wanting to send a message to would be rebels, Lady Paramount Elle executed Lord Jaime by beheading. She marched him out in front of his soldiers and beheaded him with her sword glory in front of the rebel soldiers. 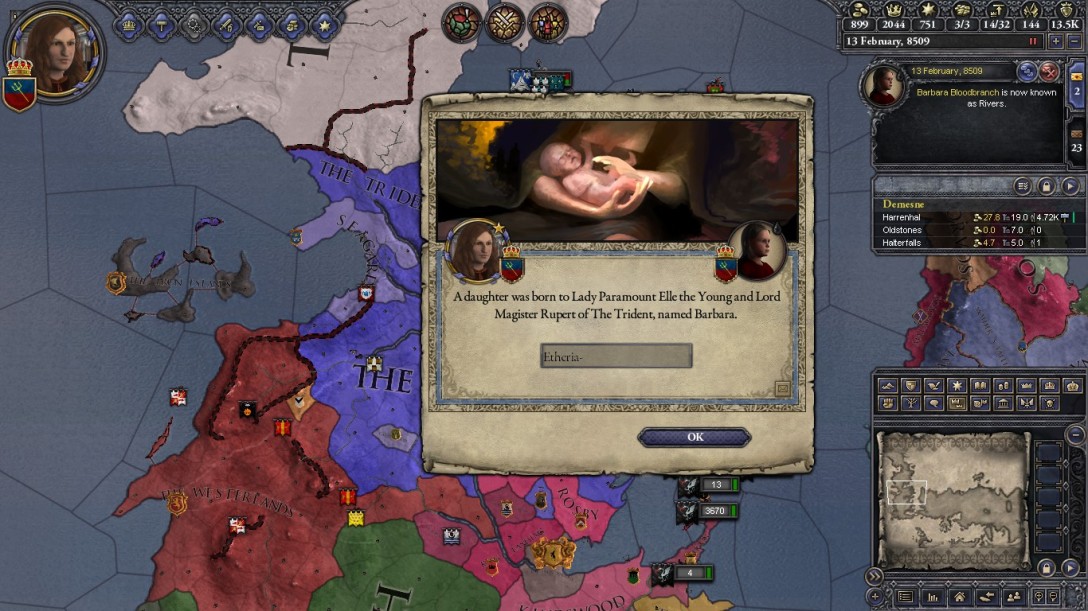 Lady Paramount Elle Bloodbranch is pregnant. Normally, this is reason for happiness, however, Lady Elle has spent the past couple months away from her husband in the field of battle. It is believed that she has had an affair with her distant cousin Forrest Bloodbranch. Regardless, controversy will surely follow.

The Bastard of the Trident:

Lady Paramount Elle has expanded her rule as she usurped the High lordship of the Bay of Crabs from Lord Josua of Riverrun. This will surely consolidate her rule as she takes more power away from House Middlebury who has tried to usurp her rule of the Trident. 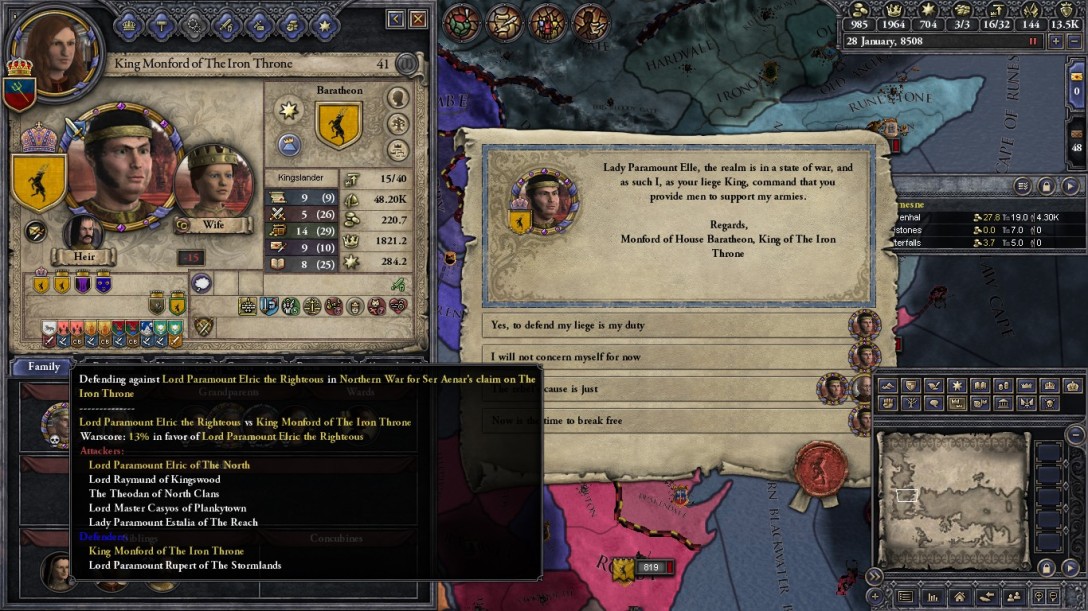 Rebellion in the North:

The North has rebelled once more as they team up with the Reach to press the claim of Ser Aenor on the Iron Throne. Defending the Iron throne is the Stormlands, but Lady Elle Paramount has decided to remain neutral following the many wars against her rule. It is believed that she doesn’t want to send her citizens to war once more in such a short period of time, which seems to be the right decision considering the current division against her rule in the Trident.

Another Bastard of the Trident: 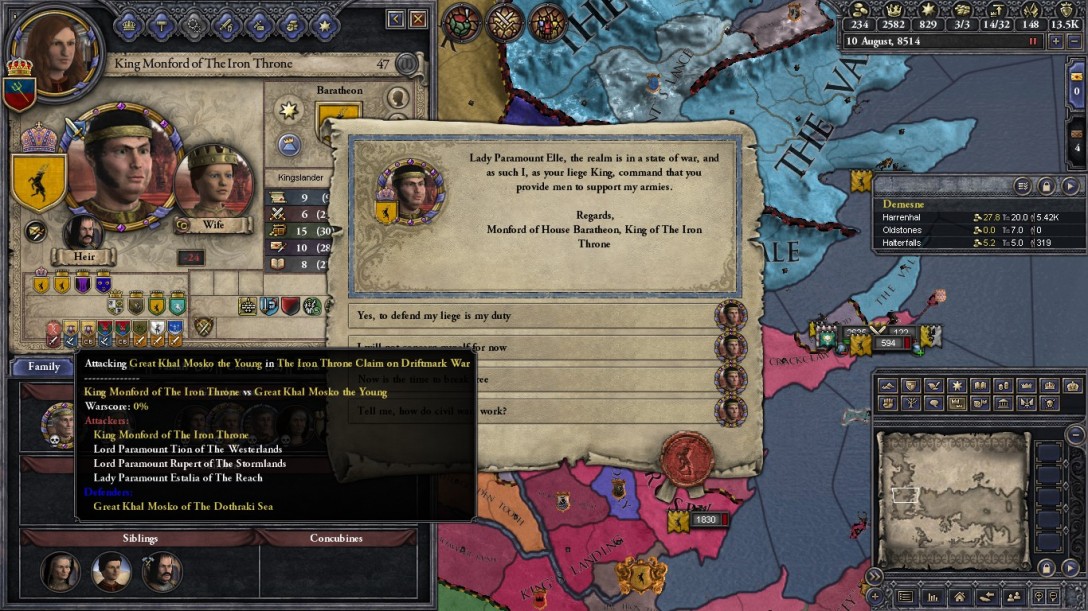 A War in Westeros:

The Seven Kingdoms is at war against the Dothraki as the Dothraki have invaded the Island of Driftmark which has traditionally belonged to the Iron Throne. The Westerlands, the Stormlands, and the Reach join the Trident and the Iron Throne in supporting the King. Despite the support, once again Lady Elle has been extremely reluctant to raise her levies and send troops to the Island. However, Lady Paramount Elle has recently become the Chief General of the Iron Throne, meaning she will command troops in the war to come.

Lord Ender Bloodbranch has married Hostella Piggsford in a ceremony in Harrenhal. The hope is that he will soon impregnate her to provide another heir to the Bloodbranch dynasty. Like his mother, Lord Ender is well known for his military prowess, but even more impressive his ability to wield a sword is reportedly unmatched in the world. He dominates in sword fights and over powers his opponents with his strength and speed. He will surely be an effective ruler. 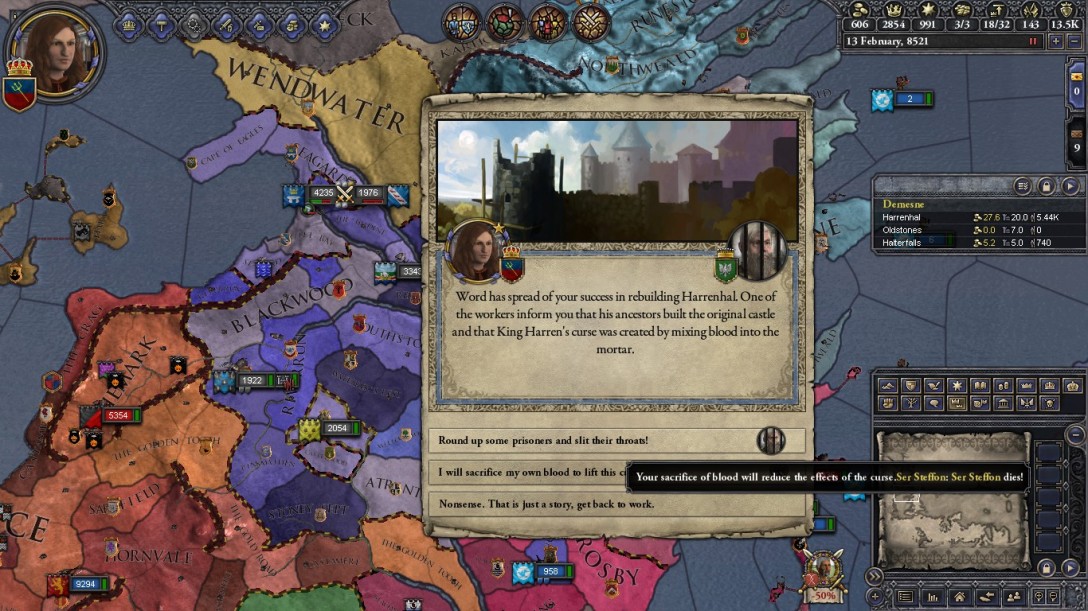 Once again in an attempt to end the curse on the family, a Bloodbranch has sacrificed a prisoner in order to mix their blood into the mortar. Lady Paramount Elle believes the more blood they put into the mortar the quicker the curse will be lifted. One thing is for certain, do not become a prisoner of the Bloodbranch family for you may become part of their castle.

Castlewood Back in the Riverlands:

Following an inheritance issue, the province of Castlewood briefly became part of the Stormlands rather than the Riverlands. Lady Paramount Elle has decided to push her claim on the territories of the Riverlands which are not under her control in order to consolidate her power. She successfully claimed Castlewood after a brief battle and siege.

Harrenhal has taken a step towards being completely repaired now that all the debris has been removed. It is believed that he curse will be lifted once the castle is repaired, and it is surely the goal that house Bloodbranch has been pursuing through their entire existence.