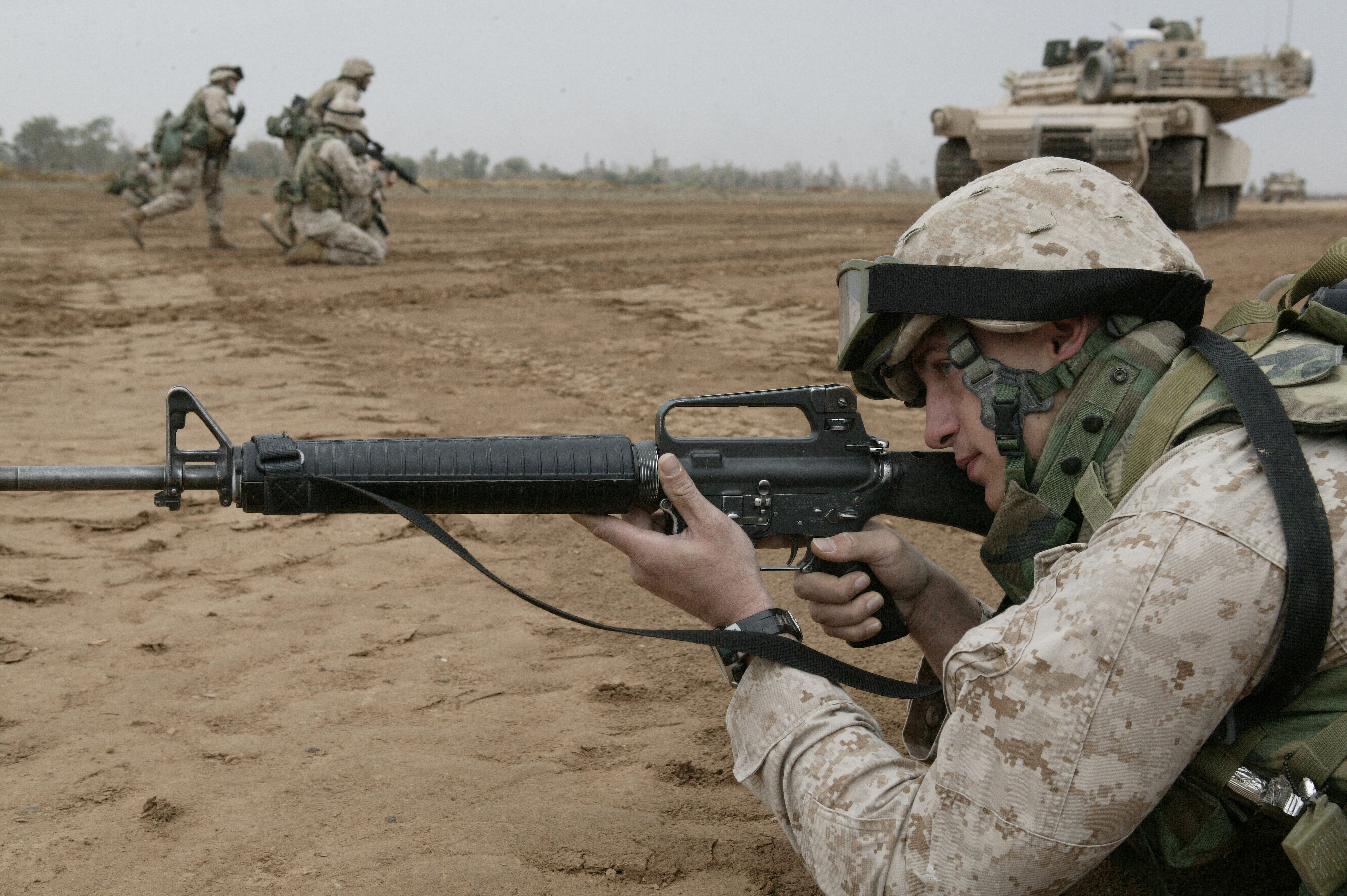 A Rifle for the Future

As the tumultuous adoption of the M16 faded into memory, and the M16A1 served through the US withdrawal from Vietnam, studies were made to extend the effective range of the infantryman’s rifle. NATO small arms trials held between 1977-80 standardized on the SS109 62gr 5.56 round due to its better performance at range than the lighter M193 round. The USMC, seeking to improve the effectiveness of its small arms, and with the new NATO round in hand, began negotiations with Colt in January of 1980 to develop a modified version of the M16A1. Primarily, they sought to improve its durability, extend its long range performance, and replace the full-automatic of the M16A1 with a three round burst.

History of the Program
The M16A2 must be viewed first and foremost as a USMC product; it was they who first proposed the upgrade, and it was they who worked with Colt to produce it. Testing in August of 1980 at NSWC Dahlgren recommended some form of a heavier barrel, and the Marines conducted tests using developmental “Product Improvement Program” M16A1E1 rifles between November and December of 1981. The Marines were very impressed with the results of the test, and the M16A1E1 was type classified as the M16A2 in September 1982, with large scale marine orders soon to follow. The original M16 “bird cage” flash hider consisted of 7 slots arranged parallel with the barrel. With the M16A2, the bottom 2 slots were deleted, in order to add a measure of compensation and avoid kicking up sand.

Whilst the earlier models of M16 had a rear sight adjustable solely for windage by use of a cartridge tip, the M16A2 rear sight is adjustable both for windage and elevation, has settings out to 800m, and has a smaller long range aperture.

Early “pencil” profile barrels were roughly the same thickness along the entirety of the barrel. The M16A2 barrel retains this profile underneath the handguards to permit use of the M203 grenade launcher, with thickening forward of the handguard cap to reduce bending under use of a sling, and to better sustain the buildup of heat due to firing.

One of the most visually distinctive changes to the M16A2 was its adoption of a symmetric, two piece circular handguard made with stronger ribbing, and capable of superior heat dissipation.

With the adoption and standardization of the 62gr SS109/M855 round, the rifle’s barrel twist was increased from the earlier 1:12 twist. Though 62gr could be adequately stabilized by 1:9, the requirement to stabilize the heavier and longer M856 tracer round necessitated the 1:7 twist, which has remained on all US service rifles that followed.

The fire control group has been modified to incorporate safe, semiautomatic, and 3-round burst firing modes. No provision is made for fully automatic.

Several other minor changes can be noted, namely; the addition of a brass deflector to prevent left-shoulder shooters being struck by brass, a delta ring for easier removal and installation of the handguards, and a circular instead of teardrop forward assist for easier manufacture, the front sight post and buttplate being changed, etc.

Being a Marine Corps design, it is only natural that the M16A2 was first adopted by that branch, with initial deliveries arriving in 1982, though the Army would not adopt the design until the late 1980s. The rifle has steadfastly served the US military since then, first seeing action during the invasion of Panama, then the Persian Gulf war, and the invasions of Iraq and Afghanistan. Though largely replaced by the M16A4 and M4 family in frontline use, it remains in use by America and her allies.

The image above is of M16A2 serial number 0001 USA, presented to the US Army in commemoration of the adoption of the M16A2, currently kept at the National Infantry Museum.

A Critical Look at the M16A2

Several of the changes made to the M16A2 are unequivocally beneficial to the rifle.The flash hider is a paragon of simplicity and effectiveness, retaining the function of the earlier model whilst adding a measure of compensation, and reducing dust and dirt kicked up when firing prone. The handguards are both more durable and interchangeable, something much appreciated by armorers. Ambidexterity is given a boon with the addition of the case deflector, and the slip ring’s transition to a delta ring makes removing the handguards far easier. Lastly, though questionable at the time, the transition to 1:7 rifling to stabilize the M856 tracer round allows for a wide variety of rounds to be stabilized through the M16/M4 family, including unforeseen types such as 77gr MK262, allowing for growth into future bullet designs.

Contentious since its inception have been the rear sights. The Marines argued that having adjustments for windage and elevation together allows for easier zeroing and manipulation in combat, and that the sights were better suited to long range shooting. On the other hand, the Army argued that the sights introduced unnecessary complexity, lacked settings for 25 and 250 meters (zeroing ranges and battlesight zero, respectively), and that it turned the rifle from an infantryman’s weapon into a competition rifle. Though the M16A2’s service history has been excellent, the 1980s ACR trials showed that, under combat conditions, an infantryman was lucky to hit 1 shot out of 10 at 220 meters, which would seem to support the Army’s position.

A far more flawed decision in retrospect has been the M16A2’s barrel profile. The thicker profiling to the M16A2’s barrel is thick in the wrong place; the requirement to mount the M203 grenade launcher means that the barrel remains thin, and thus vulnerable to overheating, where it matters the most. Whilst the thicker portion does help in accuracy when using a sling, this is an issue that is irrelevant to the majority of combat shooting.

Equally troublesome was the replacement of the M16A1’s semi/full selector with the M16A2’s semi/burst. Setting aside the technically flawed nature of the ratchet, with its varying trigger pull and propensity to fire a partial burst, the 3-round burst seeks to solve a training issue with a mechanism. Though aimed semiautomatic fire is superior in almost all instances, well trained firers can make far better use of full automatic than burst mode, especially in ambushes or final protective fires, and thus the M16A2’s adoption of a burst mode represents a deletion in capabilities.

One thought on “The Black Rifle Comes of Age – The M16A2”