By the end of 1946, the world had long stopped celebrating New Years day.  Many momentous battles and invasions became tied into the changing of the yearly calendar, and each year that passed was just one more where the world went without knowing peace and there was no reason to be optimistic that the next year would be any different. The Imperial Japanese Army felt no need to welcome in 1947, feeling very far away from home in the mountains bordering Afghanistan and Iran.

After proving his leadership in South-East Asia and India, Field Marshall Hata was the most reasonable choice in leading Japan further west.  His 36 divisions sat on the border with Afghanistan, while General Yamashita prepared for Iran.

Initial planning called for Hata to push his divisions into Afghanistan, while Yamashita held Iran in place, allowing Hata’s Army to crash on top of Iran following the defeat of the Afghan Army.  On December 30th at 3pm, whistles blew along the Japanese front line, sending hundreds of thousands of soldiers west. Yet another invasion had begun. Hata’s men instantly broke through, their only limits being the speed at which they could navigate through the treacherous terrain.  For the first time in the war, Japan had a highly capable air force, allowing the ground forces to be supported by hundreds of fighters and close air support assets.  Trudging through snow and hills, the IJA captured Kabul on February 13th.  Iran would not sit idly by, sending hundreds of thousands of men to assist.  In one of the many great tragedies of the war, the Iranian Army charged with unmatched determination but were slaughtered in the thousands by Japanese artillery, aircraft, and fellow men.  The Iranian Army was significant in size, but was largely a militia force consisting of out dated equipment and part time soldiers. Hundreds of thousands stood by to defend themselves and the Sabadat Pact, but gave themselves up as cannon fodder to an army as capable as Japan’s.  The invasion of the Middle-East soon stopped being a war, and was more comparable to murder.  With the loss of Kabul, the Sabadat Pact had lost 51,000 men.  Japan had lost 694.

As Japan was making its gains in the Middle-East, Italy was making great progress in North Africa.  Battling the English and French, Italian forces captured the key Egyptian city of Cairo on March 5th.  The Suez was now open to the Axis, and Italy began to move further south into Africa, and towards Damascus.

Slowed slightly by an unexpectedly strong winter, Hata managed to swing his forces towards Herat, forcing an Afghan surrender on April 1st.  The Japanese Army was set loose upon Iran like a flood.

Despite ferocious resistance, the Iranian Army was beaten back, losing miles of territory every day to a numerically inferior enemy.  Japanese aircraft devastated enemy ground forces in a drastically lopsided air contest.  On the 7th of October, the first Japanese troops entered Tehran, leaving Iraq and Turkey to brace for the imminent Japanese arrival.  The fight had been kicked out of the Iranian’s, who surrendered two weeks later.

In response, Hata split his forces, sending half towards the border with Turkey and half to Iraq.  The Iraqi Army was nearly non-existent, losing a quarter of its already small force in Iran.  The Japanese troops headed for Turkey would hold the opposition in place, and await for the troops assigned to Iraq to complete their duties, then regroup for a push towards Ankara.

Baghdad was captured within days, and the surrender was official on January 24th, 1948.  Turkey was now the only survivor in the Sabadat Pact.  The IJA began a large offensive into Turkey in the summer, pushing quickly on Ankara.  Italy and Vichy France had a firm grip on the Eastern Mediterranean, providing strong support to the IJA’s south, and trapping numerous Allied divisions in Syria.  In September, the new and untested Japanese 4th fleet under the command of Admiral Endo was the first to be deployed into the Mediterranean, tasked with offensive operations against enemy targets of opportunity.  The Navy now had a chance to play its role.

Japan’s first naval engagement in the Mediterranean began on the 14th of October. Supported by Italian naval bombers, a force led by Admiral Hyakutake battled with a Turkish fleet commanded by Admiral Omurtak off of Cyprus.  157 ships would rest at the bottom of the Mediterranean when the shells stopped firing.  Hyakutake would lose 47 destroyers, 6 light cruisers, 2 cruisers, and 5 submarines.  Turkey lost 90 destroyers, and 7 light cruisers.  It was more of a Pyrrhic victory for Japan, defeating the Turkish navy but taking unacceptably heavy losses to its destroyer fleet in the process.  Two weeks later, the Japanese Navy would get another shot, lead by the unshakable Yamamoto.  On October 21st, the feared 1st Fleet would sink 5 American light aircraft carriers and two French cruisers outside of the Suez, at the loss of a light cruiser and a submarine.  Yamamoto’s forces would take credit for sinking 3 more light carriers over the next month.

With the loss of Ankara on November 25th, Turkey called it quits.  The Sabadat Pact had been routed.  For every man Japan lost, the Middle-Eastern alliance lost over 45.

During the Treaty of Izmir, Japan attempted a different policy, choosing to puppet as opposed to occupy.  Japan was now significantly larger than it was a decade before, and Tokyo feared over extension as the Empire grew, and relied on ever increasing amounts of resources to function.  The Middle-East was very far from the home islands, and installing governments loyal to Japan was the preferred route when the alternative was occupation.  Four new nations were formed out of the rubble of the old: The Turan Empire, Al-Muthanna Iraq, the New Persian Empire, and the New Afghan Khanate.  All were loyal to the Axis, welcoming their new allies to make use of their roads, railways, airports, and naval bases, improved upon and propped up by Japan.  The Axis now had free use of the Suez and Middle-East to ferry men, supplies, and ships where they saw fit.

With the fall of the Middle-East, there was no time to celebrate.  Immediately following the surrender of Turkey, Field Marshall Hata was given orders to move his Army to Bohemia, in occupied Czechoslovakia, while General Yamashita was tasked with moving his 10 divisions to Munich.  The Germans had held the line, but there was no guarantee that this would last. 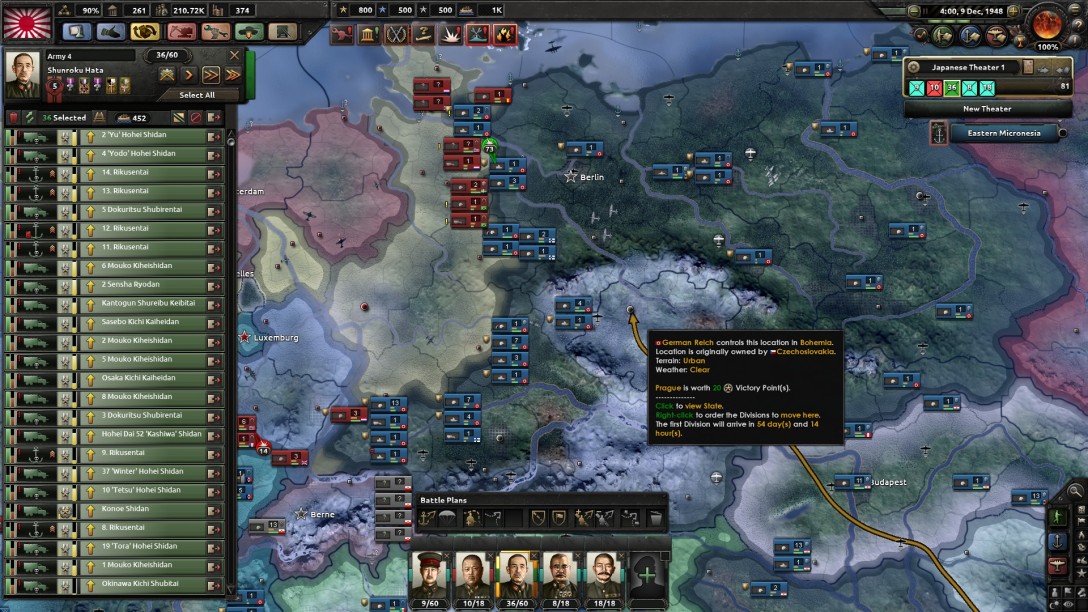 As the IJA’s armies began their trek across the snow covered Balkans, the Allies made yet another offensive stemming from Denmark.  Breaking through the northern German line, a single British division got within sight of Berlin.  A lone German infantry division on route to the front re-routed, and intercepted the English before they could begin their move into the capital city.  The British unit was routed as night fell on January 4th, 1949. Berlin was far from safe, as another half dozen Allied divisions were now within two days travel distance.  German and Finnish reserve forces arrived and took up defensive positions outside of the city, prepared to hold back potential invaders. A unit of the Japanese Imperial Guard was the first to arrive at the front, reaching Berlin on February 13th, 1949.  The Imperial Guards would be the first Japanese units to fight in Europe, pushing out of Berlin along side two German divisions under the command of Gerd von Rundstedt.

During this time, Toyko was continuing to prepare for the war to go in an increasingly undesirable direction.  The Empire of Japan had quietly been working on an atomic program for several years, climaxing with its first atomic test in February of 1949.  A weapon of such scope was appalling to many high ranking officers in Tokyo, but as the outcome of the war grew increasingly uncertain, they had to come to grips with the fact that Japan may need to take some undesirable steps to protect herself from if such a time ever occurred.  On March 3rd, Japan began construction on 4 nuclear reactors, each of which would contribute to the manufacture of atomic weapons.

Such a desperate time was beginning in Germany, as a new allied offensive broke out in Danzig.  In late March, 49 English, Belgian, Dutch, and American divisions along with 7 Dominican support regiments landed in occupied Poland, breaking out to the east and west. Hata split his forces to assist the German defensive, trying to hold the invasion in place.

The invasion began in Norway, where Germany was struggling to hold back Norwegian forces.  As German forces were being cut off, the German high command made a final last ditch effort to save their failed invasion.  On April 24th, a German strategic bomber dropped an atomic weapon on the Norwegian capital of Oslo.  The world had never experienced a weapon of such magnitude, and the delivery of the worlds first atomic weapon brought about more disbelief than anything else.  Rumors spread that the event was a fabricated propaganda move, designed to convince the Allies to surrender or else more doomsday devices would drop on other Allied cities.  It wasn’t until pictures of the ruins of Oslo began to surface that the world realized that the threat of such weapons was indeed very real, and the German Reich just opened a modern day Pandora’s box. In a single moment the rules of warfare changed forever, and both sides of the war had to look at their casualty figures and wonder if this was only the beginning.