Chapter 4 – The Guns of Warsaw

With a lightning campaign to subdue the Romanians concluded, The Tsar is caught by surprise, as without warning, Polish units across the border suddenly are reported to be shelling the Russians entrenched along the vast frontage there. Enraged, he orders an offensive, Operation Nayezdnik (‘Horseman’) in response. The tiny collection of Baltic nations shall quake beneath the Imperial Army’s boots.

Germany is unusually slow to respond to our calls for aid – despite repeated urging by our Ambassador, Hitler continues to drag his feet as to whether or not he will support us in the West.

The 7th Corps, one of our newest Land Pattern units has begun to conduct a holding action, designed to keep the Poles out of our sovereign territory until reinforcements can arrive to crush them and seize the initiative. Initial reports are positive – it seems the Tsar’s new Divisions are fighting well and all down the border the Polish assaults are quickly thrown back. 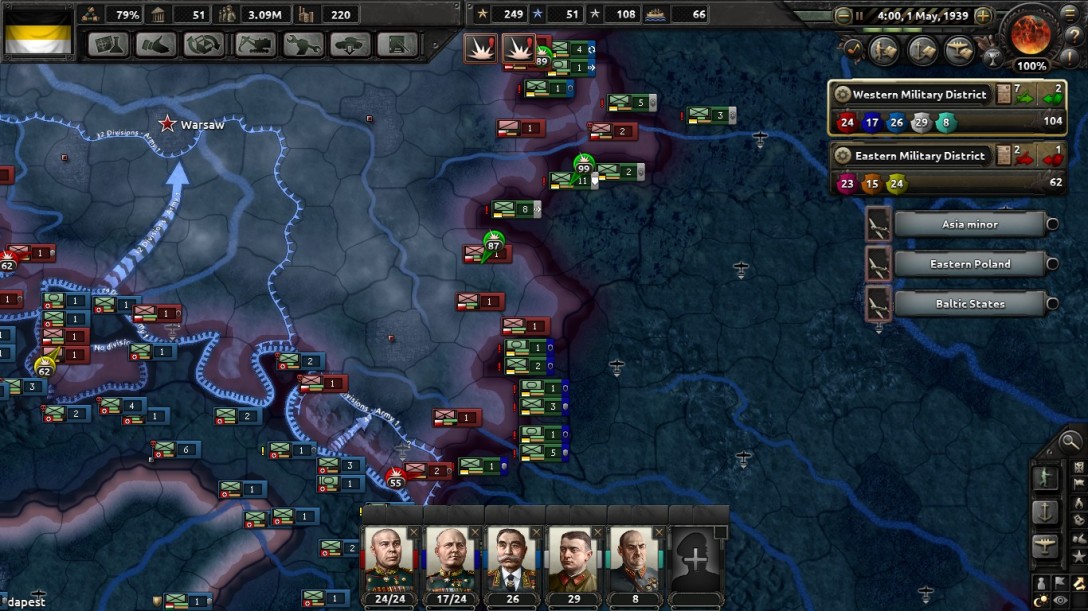 The 2nd Corps finishes preparations, and begins to prepare for an offensive Operation Horseman South, the lower portions of the offensive. Finally, Hitler decides the time is right and commits the Wehrmacht, and they begin rolling over the border, and yet again the hard Krupp steel of his Panzers shall seize the initiative.

The 4th Corps skirmishes along the border up around Minsk, determined to hold.

In the Baltics, actions along the Estonian and Latvian front are slow, as there is not enough divisions there. The main focus is still on Operation Horseman, and as such the divisions there are told to attack only when they are sure of victory, too many of the Tsar’s sons have died fighting the Turks, he wishes it not to be repeated against Slavs. 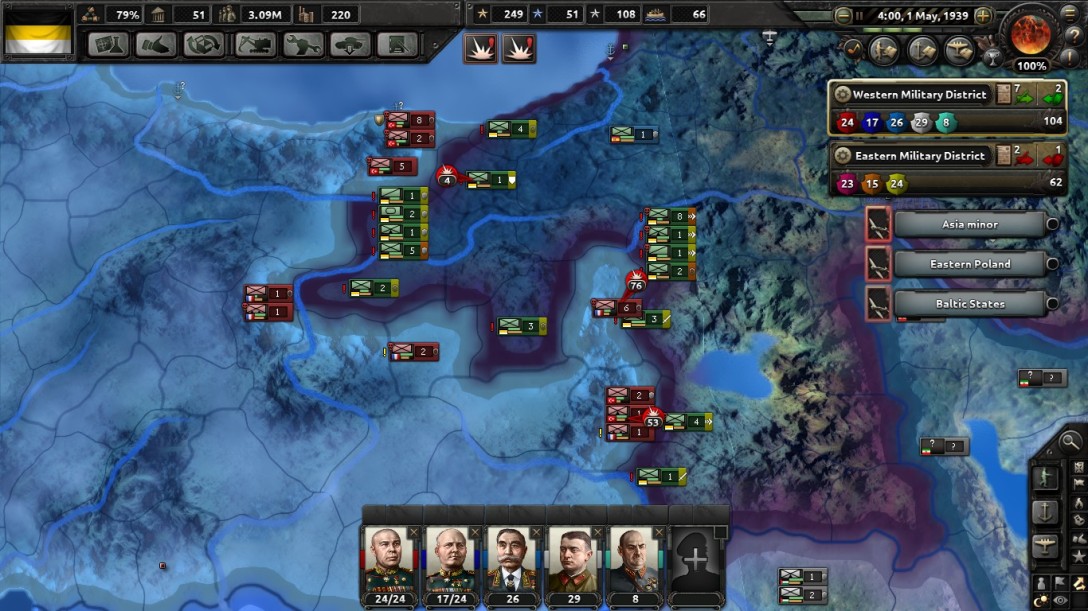 Back in the South, the Turks are on the retreat. On every front they retreat and give ground, now that they have been force out of their mountain fortifications along the border they are ill-equipped to fight a running battle and their retreat slowly morphs into a rout.

Germany throws its weight behind the drive to Warsaw, as Operation Horseman finally begins to take effect along the front, and the Tsar signs off on the formal order on May 4th for the offensive to begin, sending hundreds of thousands of his soldiers towards the Polish capital.

The 2nd Corps is to make a concerted drive onto Lwow, in an effort to both destroy the forces in the South as well as open up that frontage to allow for the 7th Corps to make more gains as pressure is relieved by Polish divisions being sent to the 2nd Corps’ area of operations.

Soldiers of the 81st Strelkovaya Division march towards Lwow as they move to engage Polish forces on May 6th, 1939. 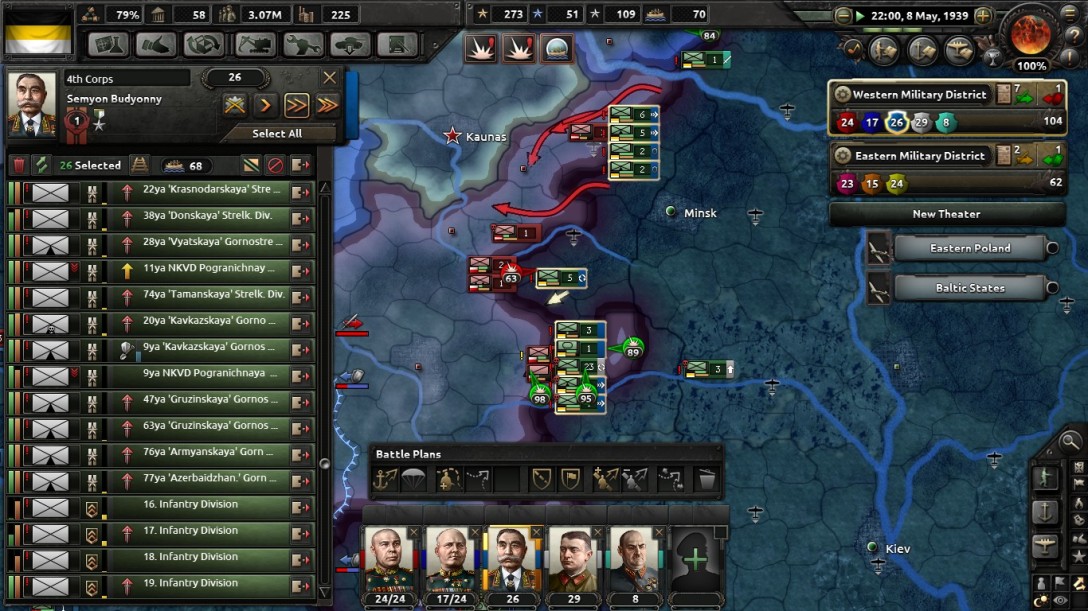 The 4th Corps drive is met with resounding success. Poland is now embattled on every front, and continues to collapse as it is woefully outnumbered. The massive gains are met with heavy losses though, as the 16th and 17th Infantry Divisions are exhausted leading the deep drive into Poland, each taking close to 3,000 casualties which is roughly one quarter of their effective strength. 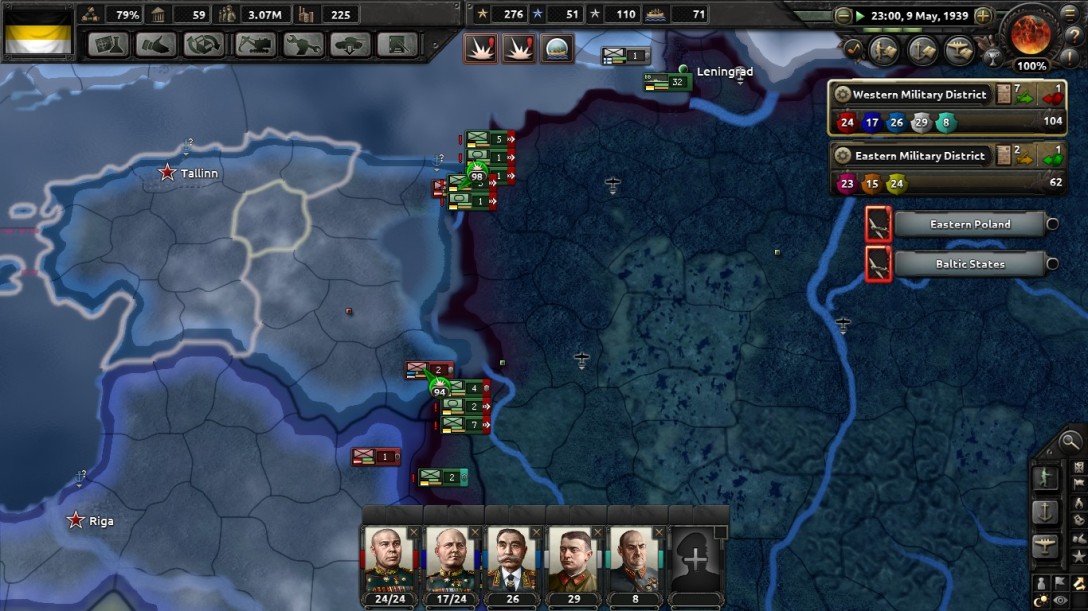 Flanked by inland lakes, the 1st Corps grinds away at the deep Estonian defenses. 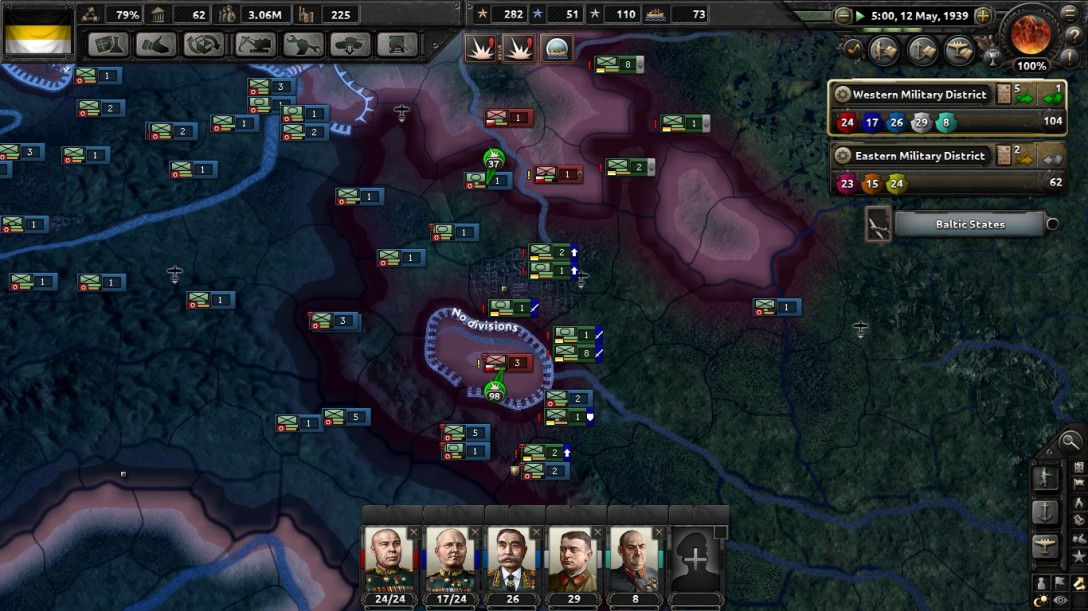 And the first pocket is created as 3 Polish infantry divisions are encircled by both German and Russian forces, showing the true cooperation of these great nations. All 45,000 of them will be either killed or captured in the following week. Lwow also falls, as Operation Horseman and Operation Horseman South take full effect. 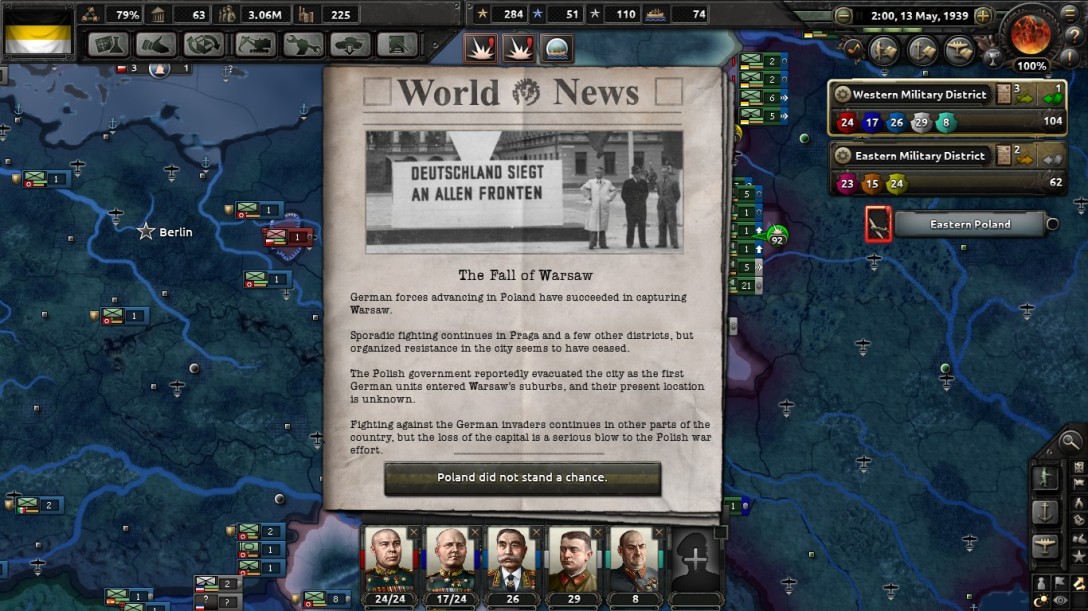 Germany’s drive is rewarded, as they seize the Polish capital in a daring 6-day offensive that resulted in the Polish Army finally breaking and relenting, with the official surrender of the Army arriving at the steps of the Reichstag and Kremlin the second week of May. Poland lasted barely a month, fitting for they are not made of the same hardy stock as Russian soldiers. Some elements choose to fight on, bravely defying the orders of their government. 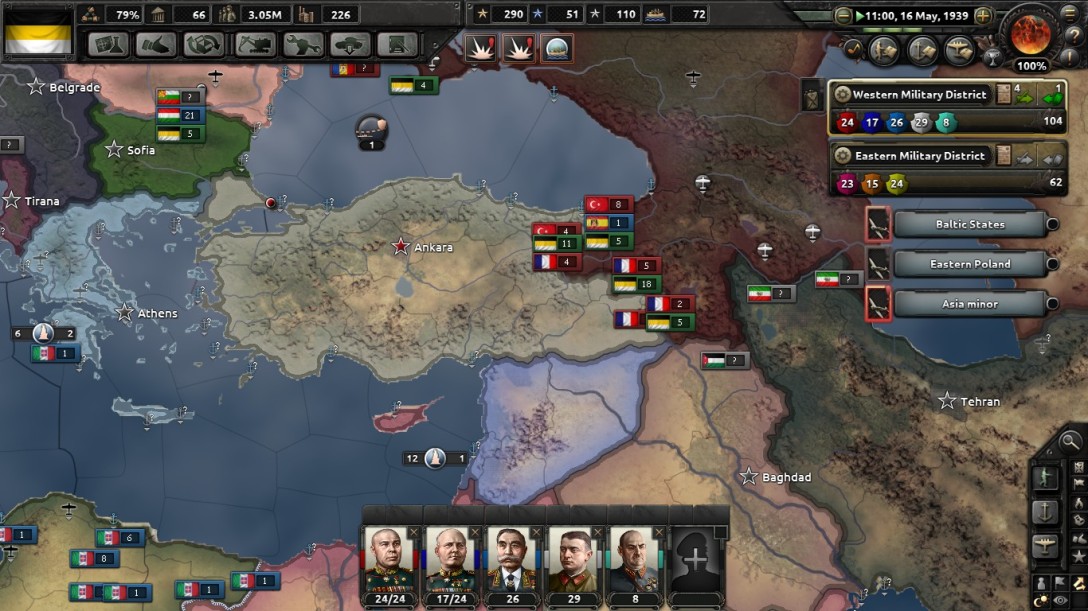 The overview of the Turkish campaign is looking up, as General Tchekoslo’s leadership of the District continues to prove effective. Despite stiff resistance with the arrival of France’s Syrian garrison, the drive for Ankara continues, and with each passing day Turkey grows weaker as it cannot replace the losses it incurs. Out of the mountains, Russians begin to win devastating victory after devastating victory, both on land and sea.

Poland, though broken, managed to buy enough time for the French to make a suicidal amphibious landing on Danzig, and the forces nearby are told to allow Germans to retake Germany, for the Lithuanian problem must be resolved, and the 2nd Corps is ordered North.

The heroes of the 1st Corps break through, and being to take Estonian territory.

More steel is needed for the guns and tanks of the Imperial Army to be fielded, and from the United States it is purchased. It matters not that the United Kingdom and French consistently attack our convoys, as we build more ships than they have torpedoes.

Finally, Poland bends the knee, with the government’s official surrender signalling the end of a short but brutal campaign. Operation Horseman is chalked up to a success, and the Tsar praises General Levesoski for his excellent planning and execution, and appoints him as the military government of occupied Poland in the interim.

Although the equipment is wildly inferior to our own, guns for the Army are still guns, and the artillery is taken as the rapid fielding of new Land Pattern Divisions means there is a temporary shortage.

Vilnius stands as bastion of Polish resistance, with the shattered remains of the Polish Army fighting with French expeditionary forces and the advance guard of the Lithuanian Army. 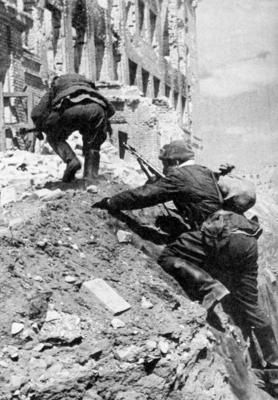 Rifleman Popov Stepanovichof and Corporal Usenko Timurovich the 154th Infantry Regiment, 2nd Brigade, 16th Infantry Division fight savagely for the the Old District of Vilnius. Despite crippling losses, the 15th would fight until it was at 50% strength during the Battle of Vilnius.

Finally – after several months of hard fighting the Imperial Army is rewarded with a ceasefire as Baltic leaders meet with The Tsar and German Foreign Minister Joachim Ribbentrop in Riga for discussion and peace talks.

The Tsar’s main focus will be to gain as much industry and essential farmland as possible, as the blood of Russian heroes was shed for such gains and not even Germany should be allowed to compromise this.

Thanks to an oversight by the German Foreign Minister, Warsaw is claimed for Russia!

Lithuania and Estonia are taken, Latvia is a natural next choice for occupation.

And it seems that in the West – there is peace in our time. Not so in Turkey, but the resilience of the Turk is the main issue, as well as previous General’s incompetence. Russia claimed 15 states to Germany’s 6, giving credence to the old phrase, “The early bird gets the worm.” 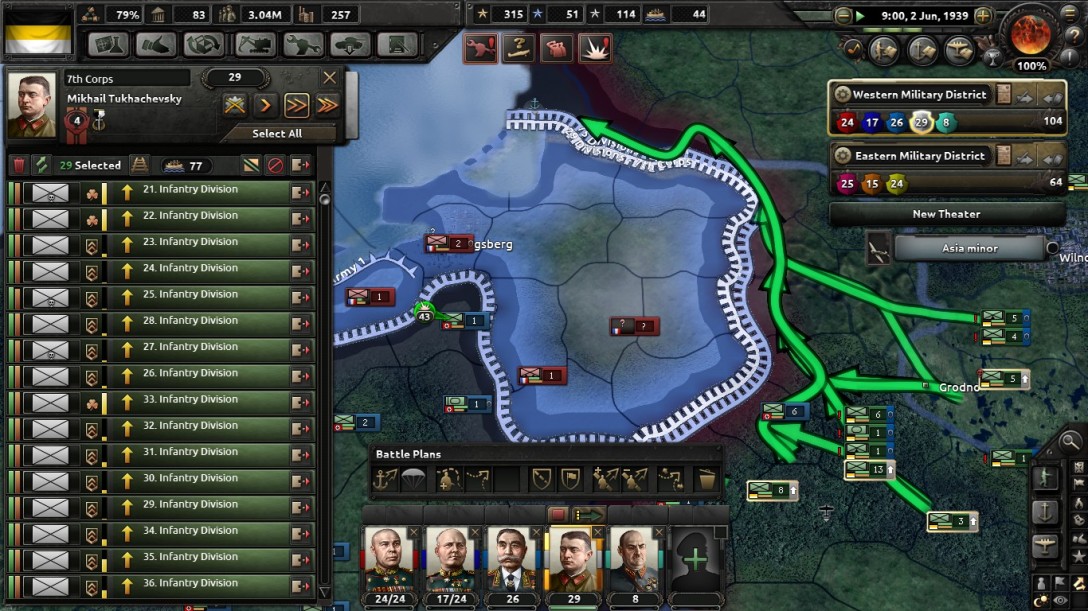 The 2nd and 7th Corps are assigned to holding actions around the Danzig pocket as Germany slowly pushes the French back into the sea. 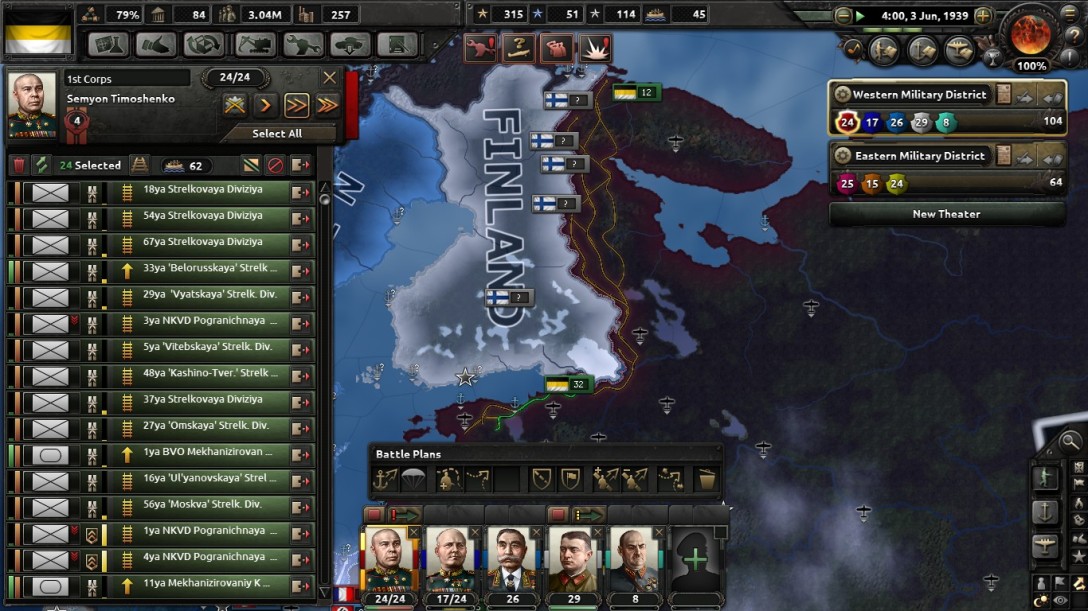 The 1st Corps is sent back North to Finland to guard the border, as preemptive action against Russia as seen in Poland will no longer be tolerated, especially by the Finns. 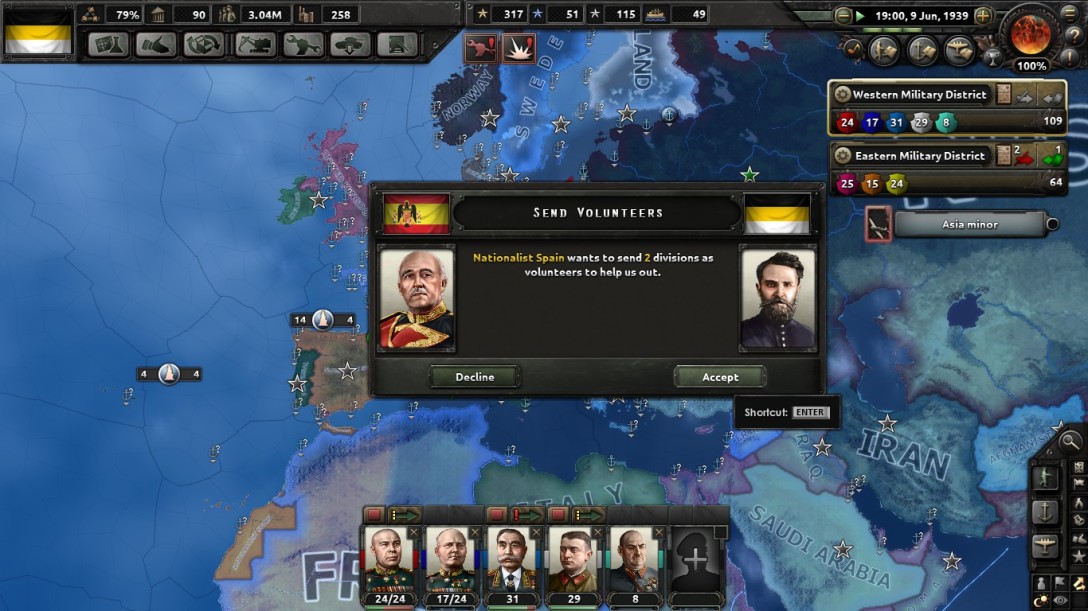 More Spaniards wish to wet their blades against the Turk – and rightfully so as the fighting is a good opportunity for the Spanish to harden their own soldiers without risking war with the Allies. Naturally, the Prime Minister accepts.

France throws itself on the beachheads of Hungary, attempting to open another front. They are tossed back into the sea with little concern for POWs. 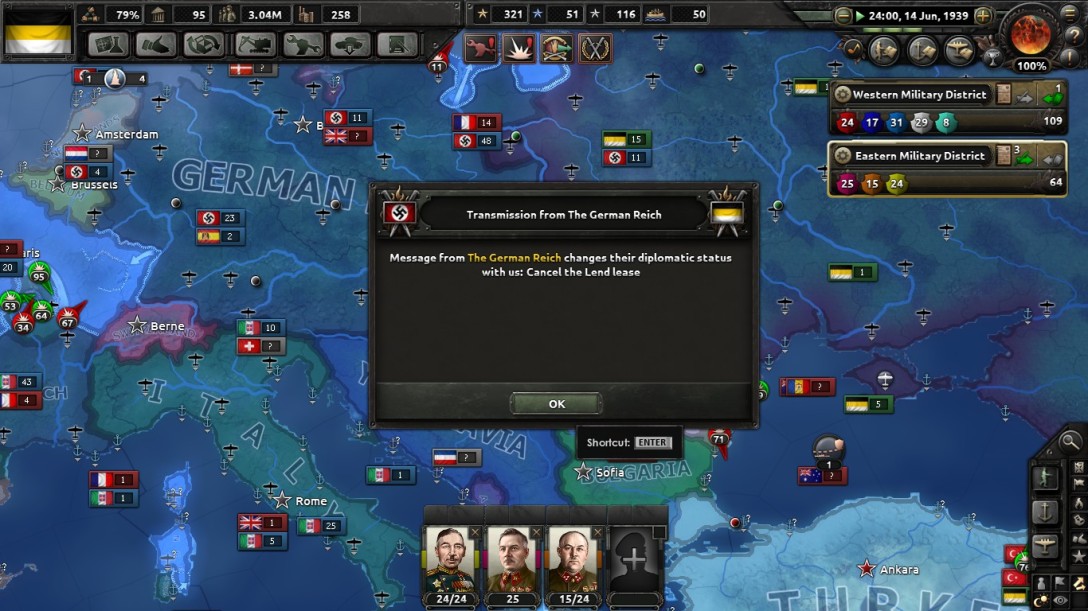 Germany denies us more of their PzIIIs, and while externally the Tsar expresses concern, internally is relieved that the Germans have done this, as the extra logistical constraints imposed on the armoured units equipped with them have caused headaches for the Staff and Planning Office. 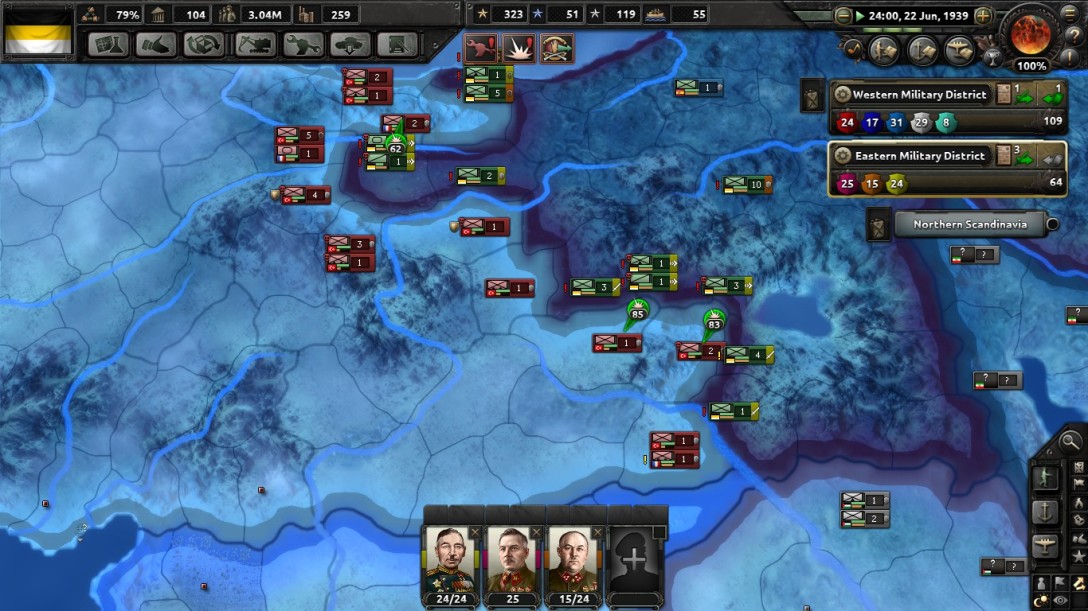 Russians stream out of the mountains, and 15 of the Imperial Army’s divisions are opposed by a meager three under strength Turkish ones.

The Imperial Staff and Planning Office wishes to speed up the process of Turkish capitulation, a foregone conclusion but one that is sadly in the future, and reassigns the 2nd Corps from the French containment by Danzig to the Southern Front.

The summer makes for good campaigning, as more and more Russian troops stream into the reserve areas to exploit combat gains made by the beleaguered 3rd Corps. By now, General Pliyev’s renown as a commander is well known, as he dominates the French and Turks after Tchekoslo lets him off the leash. 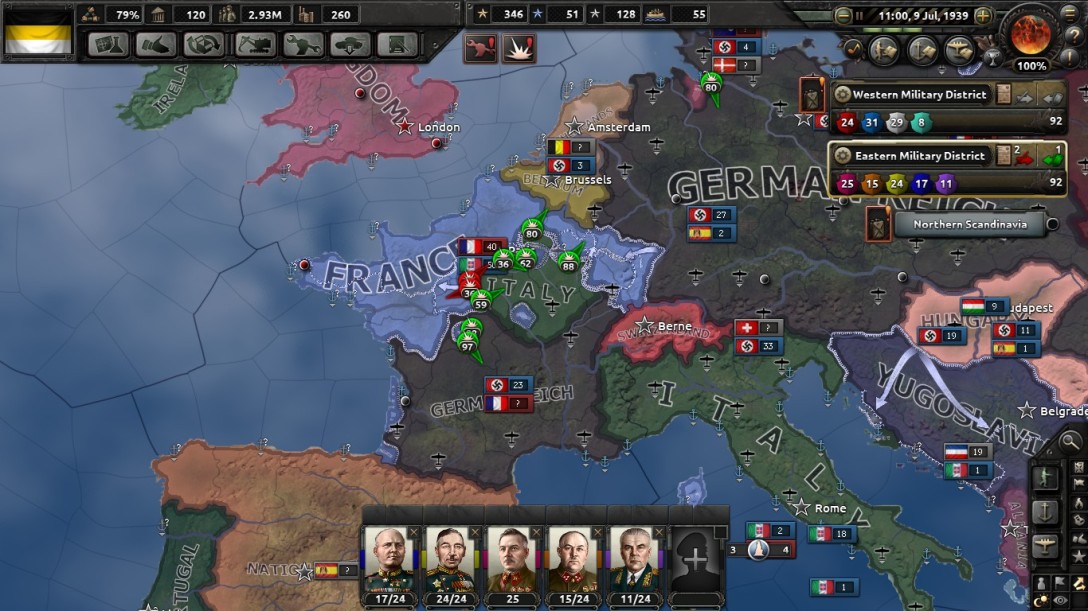 In Western Europe, France continues to get kicked like a starving dog in the street as it attempts to fight both the Italian and German armies. After the Maginot Line proved too difficult to break through, Germany reassigned two armies to Italy, and surprised the French with a winter offensive through Provence.

The Danzig pocket tightens around French forces trapped there, Divisions that may have been put to better use guarding their own homes and sovereign territory.

In the East, Japan has slain hundreds of thousands of Chinamen, and their armies win on every front, as now they are moving to cut China off from the sea to strangle them economically. Russian Ambassador to Japan, Yudin N. Igorevich reports that Hirohito is determined to destroy the Chinese is a decisive action, yet with every decisive action they seem to regroup and prepare to fight again. The Tsar respects Chinese resolve, as it allows Japan to focus on somewhere other than Manchuria.

Italy meanwhile has suffered greatly in Africa, as the United Kingdom’s Indian colonial troops dominate the battlefields and jungles of the continent. 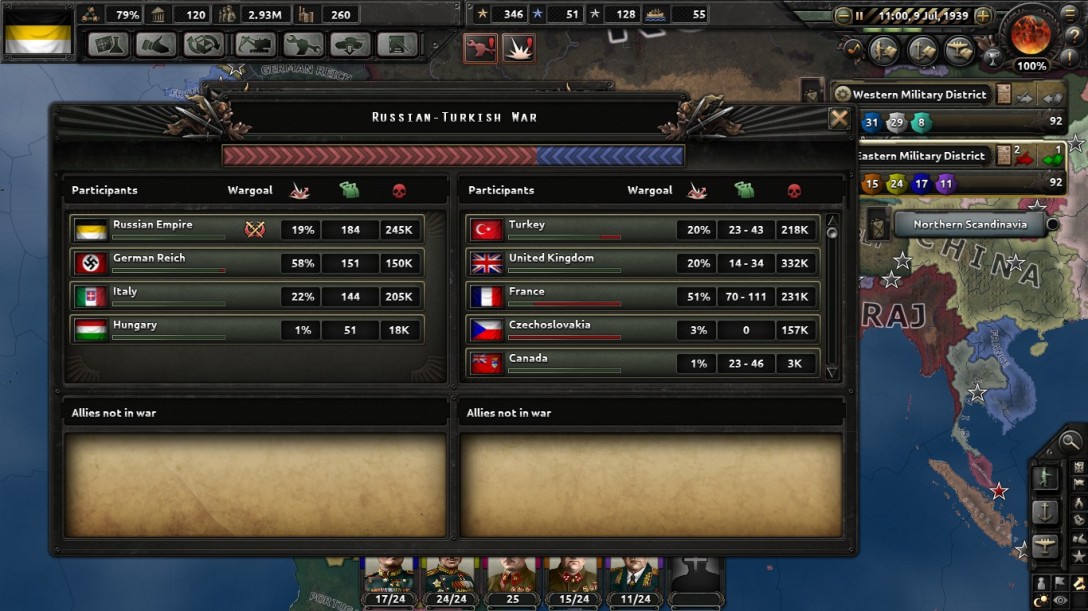 The war this far has not been kind to the Allies, as their combined casualties creep closer to a combined one million in losses.

Pliyev’s 3rd Corps makes a heroic dash for more ports along the Black Sea coast in an aim to cut off 7 Turkish divisions embattled near Trabzon. 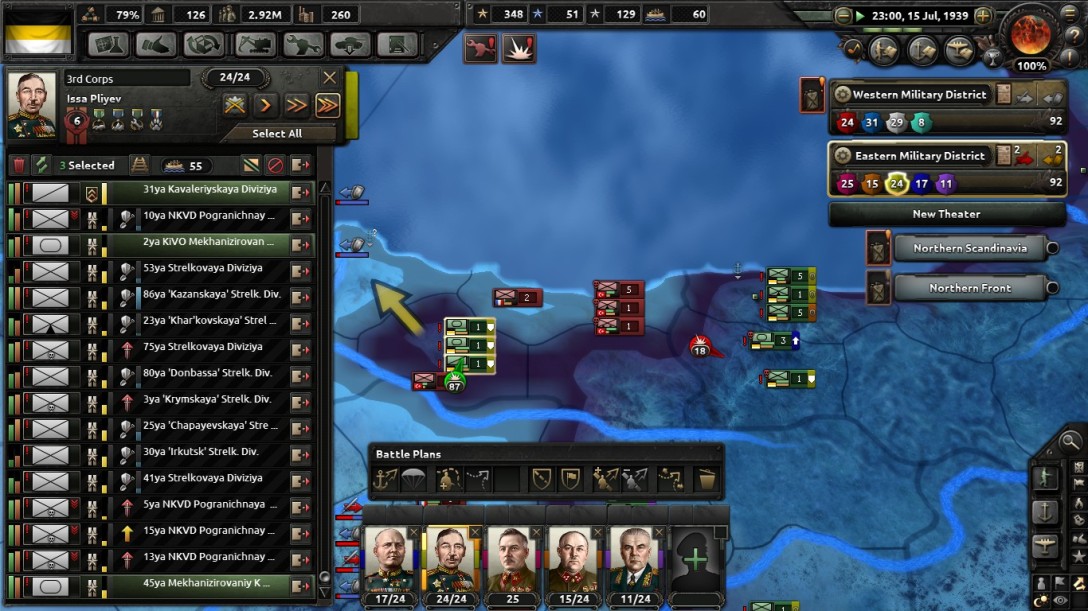 The push is met with initial success, and the mechanized and armoured forces, combined with the remaining loyal cavalry elements that survived the Cavalry Purge (mostly Mongolians) push hard to cut off the divisions encircled there.

News reaches the Tsar of Paris’ fall, and the subsequent French surrender. Shocked, the Tsar sits in an office chair, cracking a rare smile. He looks at the courier, and instructs him to send word to Hitler and congratulate him, as well as begin the process for drawing up plans to consolidate power in the Balkans. Ever the realist, the Tsar can see the politics of the continent are about to change with the loss of one of Europe’s great powers.