Chapter One: The New Lord and the Frey Rebellion 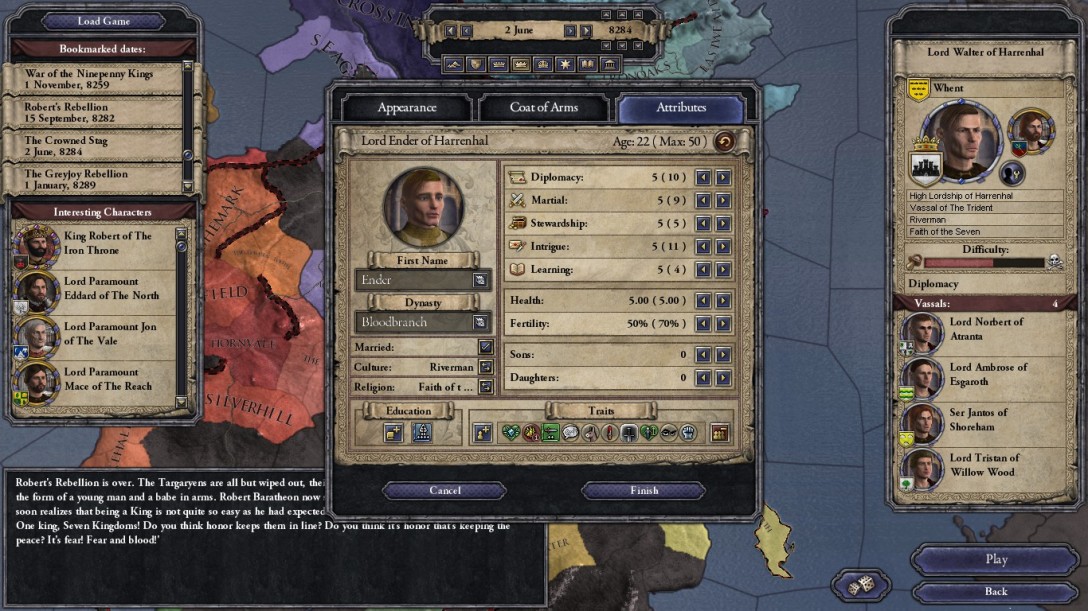 A LORD OF RUINS:

Westeros has a new High Lord. Lord Ender of Harrenhal has taken the seat of power in Westeros’ most famous, ruinous castle. His service in Robert’s Rebellion was excellent as he played a significant role in endearing Lord Paramount Tywin Lannister to the rebellion’s cause. Given his loyalty to the cause, King Robert saw fit to allow Lord Ender to create himself a House, to which all of his blood relatives will belong. After the ceremony the courtier Ender left Lord Ender Bloodbranch of Harrenhal at just 22 years of age. His house sigil is a tree with blood red leaves, and his house motto is Death is King. May his reign be blessed.

News from the Riverlands, Lord Paramount Hoster Tully has declared war against Lord Walder Frey of the Crossing for the crime of failing to keep the peace and disobeying an expressed command from his liege lord. Lord Frey has raised his troops and has begun to march south, while the bannermen of House Tully have raised their troops in loyalty to their liege. Interestingly, Lord Ender “The New Lord” of Harrenhal, has not yet raised troops in response to Lord Paramount Tully’s command. Perhaps he does not feel loyalty to his new king, or perhaps the New Lord does not wish to engage in a war so soon into his reign. Time will tell, but the Frey Rebellion seems doomed from the start as they are alone in their rebellion, fighting the combined and significant forces of House Tully.

THE FREY REBELLION OVER?

The Frey Rebellion seems to be going poorly for the ill prepared Frey’s as Lord Walder’s forces have already been smashed by the forces of House Tully. A small contingent of Frey troops have fled south, further into the Riverlands after being broken in the battle of Seagard. In the South, Lord Ender “The New Lord” of Harrenhal has raised his troops and begun a march north to meet the Frey forces on the field of battle. It seems the New Lord has the taste for battle on his tongue and wishes to quickly show his loyalty to House Frey and also bring Prestige to his new fledgling House.

THE FREY REBELLION MEETS AN ENDER:

The Frey Rebellion seems to have failed. Lord Ender “The New Lord” tricked the Frey troops into running from his forces, and instead of chasing down and engaging the Frey forces, The New Lord lay siege to the Twins instead. After days of sieging, the New Lord emerged victorious in his first battle, imprisoning the majority of Frey family in his dungeons. It seems the Frey Rebellion will soon come to an end as the Frey forces remain shattered, and the Frey family in irons. Lord Paramount Hoster Tully has demanded the transfer of the imprisoned Freys to his Dungeons in the Riverlands and the New Lord has agreed, sending the Freys on the long journey from Harrenhal to Riverrun. 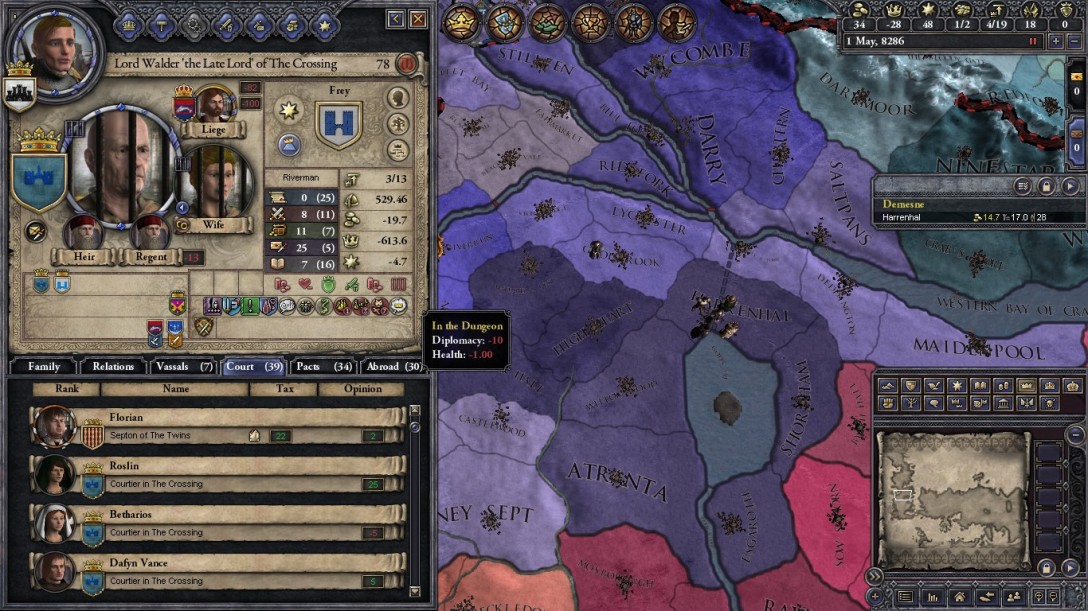 The Frey Rebellion has ended as we all suspected, the Frey’s have been crushed, their family imprisoned and Lord Walder Frey surrendered and submitted himself to Lord Paramount Hoster Tully in order to join his family in the dungeons. Lord Frey’s son has taken his role as regent in his stead, and awaits the potential execution of his father and much of his family. It seems Lord Paramount Hoster has demonstrated the rest of his vassals the consequences of a rebellion in the Riverlands. Though not as vicious as the famous Reyne Rebellion of Castamere, the Frey Rebellion will surely go down as another proud Lord making a poor decision in hopes of gaining power, prestige, and fame. The Frey Rebellion did succeed in one endeavour, Lord Paramount Hoster Tully is no more, slain in combat by Jared Frey. His son, Edmure Tully II is now Lord Paramount of the Riverlands, may his reign be blessed. 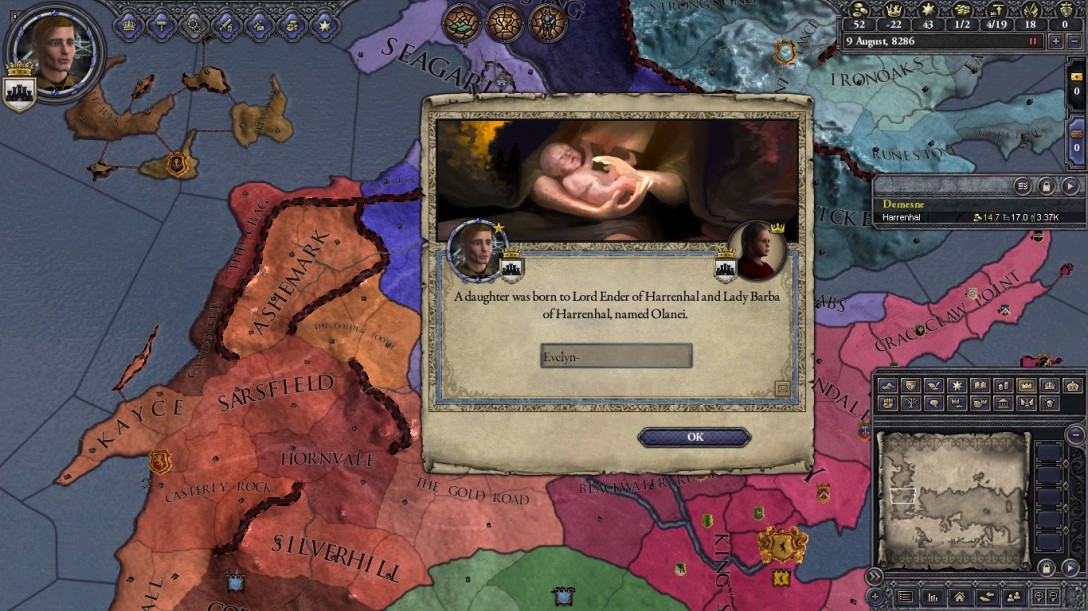 Lord Ender “The New Lord” of Harrenhal has created new life and a child of his dynasty. Lady Evelyn of Harrenhal was born August 9th 8286 to the New Lord and has become the heir to his dynasty. Unfortunately, though the girl shares her father’s imposing size, she is sickly, and it is unlikely the baby will survive infancy. One thing is for sure, House Bloodbranch are the giants of Harrenhal. At least for now.

More news from House Bloodbranch, Lord Ender “The New Lord” has been bestowed the honour of a knighthood. This move surprises many considering his lack of military experience, though the decisive victory in the one battle he commanded was impressive, it is hardly enough experience. However, that is not the only requisite for a knighthood and a septon has seen fit to present the New Lord with a knighthood, an honour of which Lord Ender is gracious.

Once again, Lord Ender of Harrenhal has had a Daughter. This time named Erika Bloodbranch. Following the death of her sickly sister, Evelyn Bloodbranch, Erika is now the heir of House Bloodbranch. She, unlike her sister is of normal stature, not carrying the giant’s blood of her father. Also, unlike her sister, she is a healthy child expected to survive infancy. Perhaps the tragic curse of Harrenhal is broken and a lord may rule over the lands and prosper. 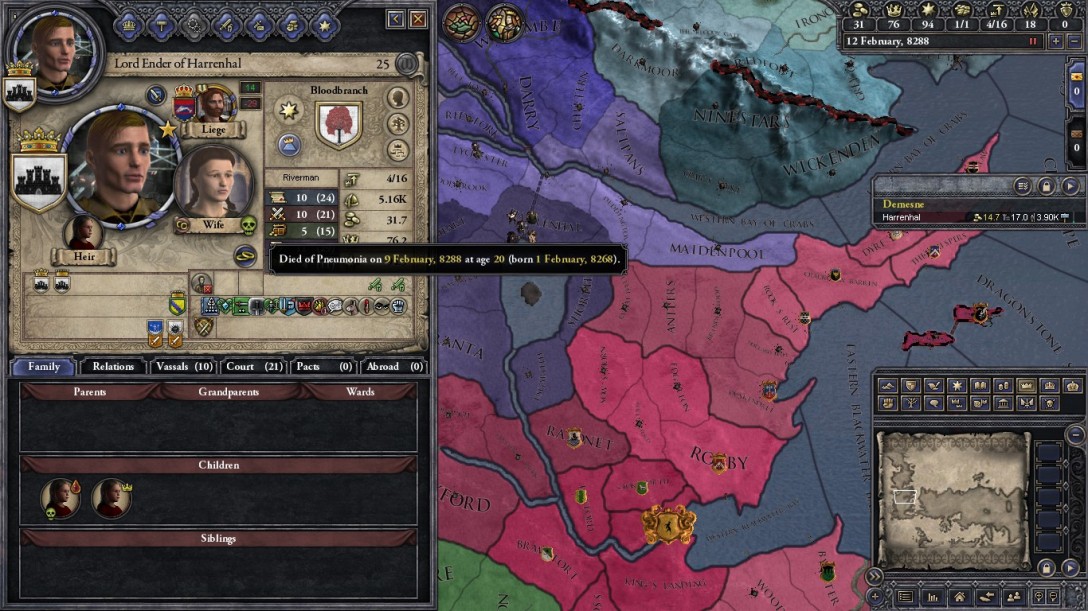 The Lady of Harrenhal has died of pneumonia. She leaves behind a single daughter, Lady Erika Bloodbranch of Harrenhal. It seems the curse on the Lordship of Harrenhal has persisted, and the Bloodbranch family is not immune to the curse. Following the death of his wife, Lord Ender remarried Lady Dana Whent and named her his regent. An interesting an quickly timed decision from his lordship, but it is also important to consider Lord Ender does not have a son, and perhaps this marriage is an attempt to conceive one.

Lady Erika of Harrenhal has become betrothed matrilinearly to Theodan of Vaith. The two families have agreed upon the betrothal as this gives House Vaith more influence in the Riverlands whereas for House Bloodbranch, this ensures the survival of their House should a son not be born to Lord Ender. It is unsure how the people of Harrenhal will react to the decision as one of their new liege lords will be Dornish. Another intriguing factor is that Theodan is a giant, and it seems that House Bloodbranch wishes to ensure the physical supremacy of their heirs for a long time to come. May their betrothal be a happy and prosperous one. 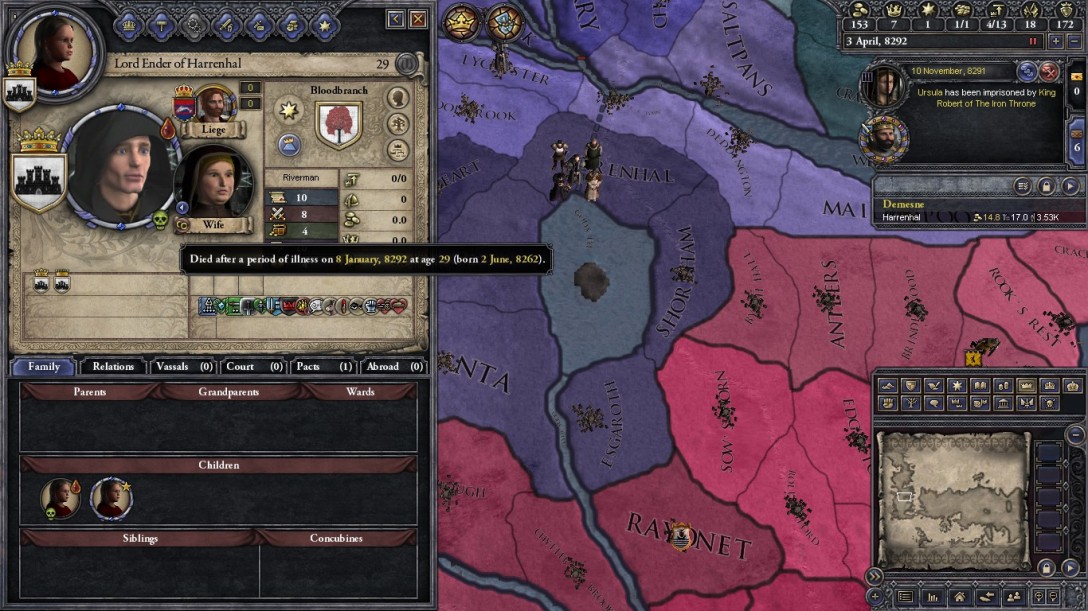 Lord Ender of Harrenhal has died after a period of illness at age 29. He leaves behind a single child, his Daughter Erika who will become Lady Erika of Harrenhal, may her reign be blessed. It seems the curse of Harrenhal lives and has taken another Lord of Harrenhal with it. So long as House Bloodbranch rules over Harrehal, it seems likely that they will suffer. Additionally, due to his untimely death, and Lady Erika’s young age, Lady Dana Whent will rule as regent until Lady Erika becomes of age and can rule her seat of power. In the meantime, it seems likely that little will happen for the Bloodbranch family until a new heir is born.