Chapter 1 – Affairs of the State

Following the downfall of order and justice within Russia’s sovereign borders, Tsar Nicholas would find his nation embroiled in war. He had barely survived an assassination attempt by members of his own government, aimed at setting up the Russian Provisional Government during the February Revolution. Tsar Nicholas sued for peace with the German Empire, quickly having his surrender accepted as Germany was able to shift forces West, but sadly to no avail as their fate would be sealed by the sinking of American merchantmen, and the rest is history. The bloody civil war would see brother against brother, neighbor against neighbor as the fighting raged. Stalingrad was reduced to a fiery rubble, and then rebuilt, forever to be symbol of the Tsar’s kindness and mercy. But now, on the eve of January 1st, 1936 war again brews in Europe, as Hitler and his Nazis have begun to turn the wheels of history yet again in a gamble for German supremacy.

The Tsar’s first aim is to re-industrialize the heartland of the Empire – embarking on a grand adventure of industry. Steel and iron shall soon become the bones of which Russia builds its muscle! But this is just the beginning, as massive amounts of money, effort, and manpower are poured into this endeavour, more yet still must be earmarked for the army in the future. The Tsar unfortunately has become ill, with an ailment that precludes him from carrying out much of the daily tasks required of his office. In a stunning move, he declares what becomes known as the January Proclamation, giving the Prime Minister the powers to rule and govern the nation, not just the powers as the head of government.

To this position, long-time ally and veteran of both the Great War and the Civil War Konstantin Rodzaevsky is appointed, moving from his position as Minister of the Interior to the new offices in Moscow. 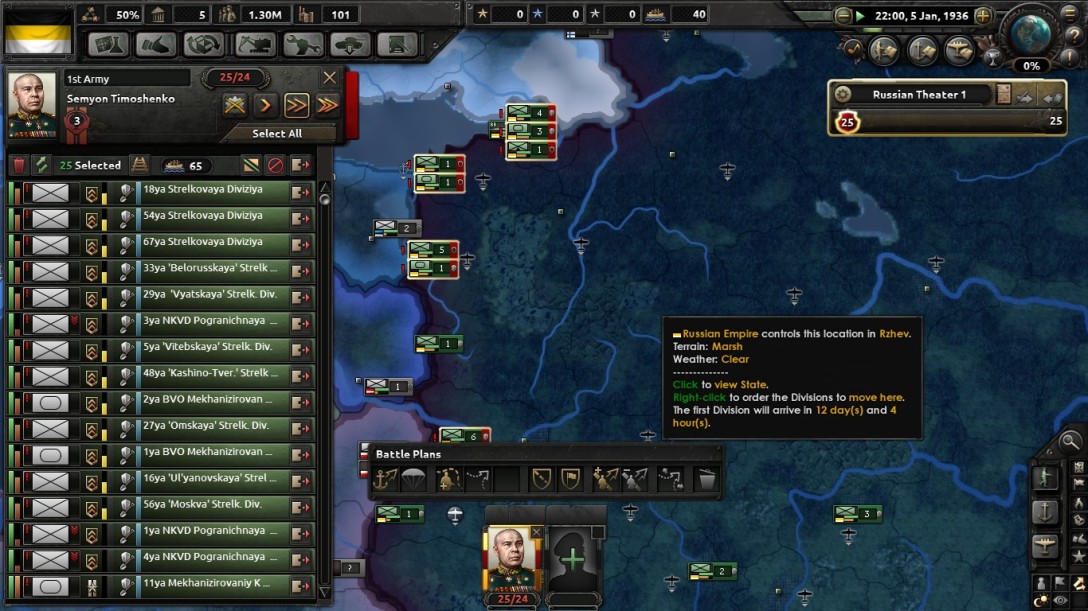 The first aim of the new Prime Minister is to appoint Semyon Timoshenko as the head of the 1st Army – a position which he fills with pride as his wish to serve the Motherland runs as deep as the waters of the Volga. He is given command of a 24-division frontage, and is quickly sent to guard the Finnish border, as the Tsar is ever paranoid about what the Finns shall do with regards to Russian sovereignty.

Yet it seems the lessons and hangings of 1917 and 1918 are not forgotten. The interior industrialization and creation of so many privatized factories causes outcries from the political left. They balk and demand that this is abuse of the ‘working classes’ however, with national unity so low, the Communist sympathizers, long thought gone again have seen it fit to rear their ugly heads. Demanding that their voices be heard in Parliament, and that the Proletariat be given the means of production and governance over themselves. 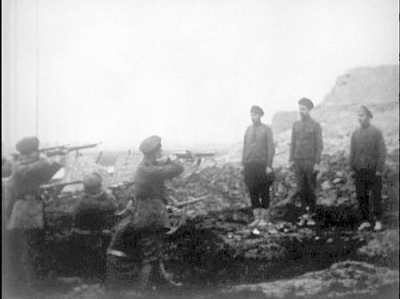 The Tsar laughs, and the Okhrana agents that before rounded up thousands again go to work. Breaking down doors, hauling men onto the streets, they find that much of the communist rabble stems from the Cavalry Corps. Appalled that one of the shining bastions of Russian heritage and martial excellence could be corrupted by such influences, the Tsar begins the process of gleaning the Cavalry Corps, destroying entire divisions and disbanding dozens of regiments, their colours burned and their officers executed by firing squad. At the end, only a handful of cavalry divisions remain along the Empire’s frontage.

However, it seems that the people were approving of these ‘changes’ in military leadership. Outpouring of support in the streets demonized the ‘Red Horsemen” and people burned effigies, with the final day of the purges coming to an end just after St. Valentine’s Day. 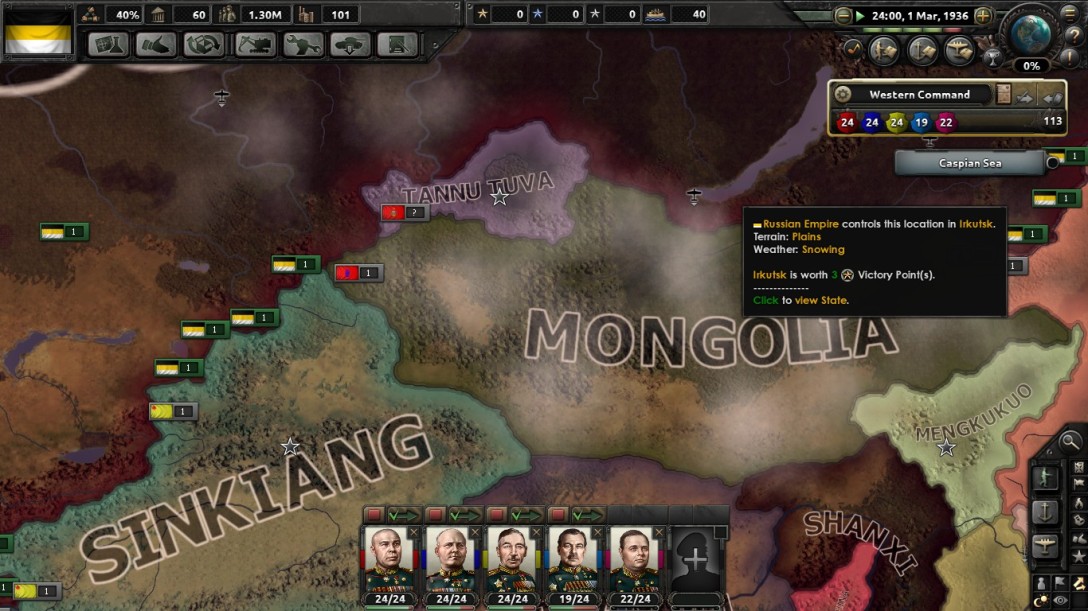 In the Urals, the change in government has proven too much for the weak governments of Tannu Tuva and Mongolia. Both choose to leave the ‘Comintern’ faction, a sham propped up by the remaining leftists within Parliament for the purpose of providing a thicker buffer zone against potential Japanese excursions. When asked how he felt about the sudden betrayal of two generally unimportant allies, the Tsar sighed, and was quoted as asking for the Moscow Tribune so he could read about the plays and dramas going on, seemingly uninterested at the politics of such minor nations.

And yet with the spring of 1936 coming to fruition Germany seemed hellbent at angering the British and French with their incessant posturing.

The result is that the Prime Minister demands the workers of the Russian Empire be put to work, and from their hands more rifles, howitzers, and trucks shall take to the field. The first Industrial White Paper of 1936 is called for, and the economic census shows that as of April, the Russian Empire had 59 civilian factories and 36 military, a drop in the bucket compared to some other world powers, and this the Tsar is determined to change. Partial Mobilization is enacted, but with national unity still so low, there is whispers of a summer rebellion, for which the Tsar continues to be paranoid of, an unfortunate side effect that has followed him since the failed assassination attempt decades before. 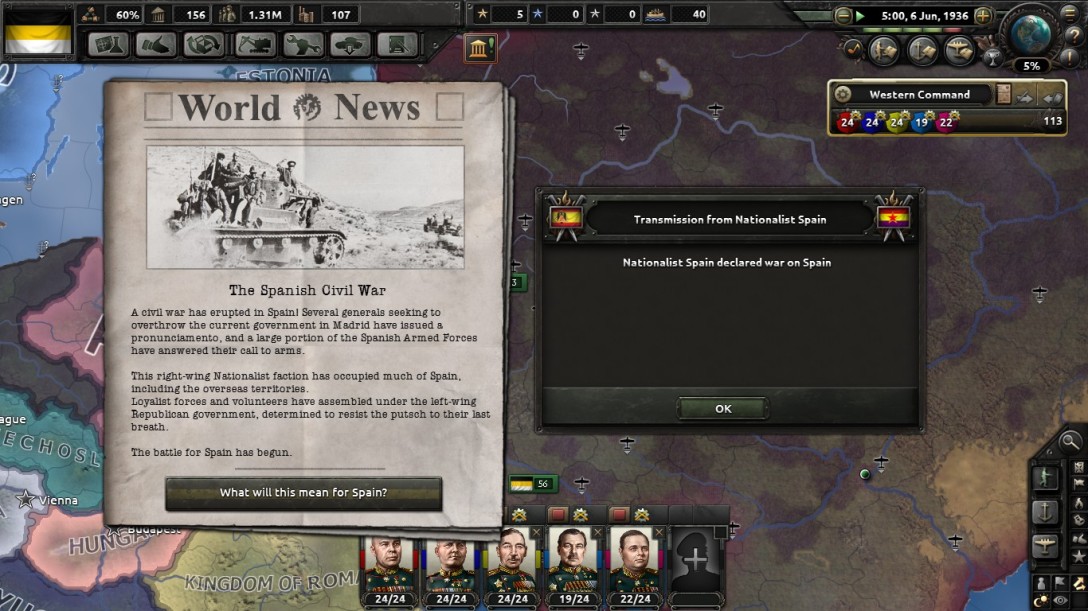 And it seems those mutters if communist rebellion are accurate, just not in the country the Tsar calls home. The Prime Minister’s desk is flooded with reports of the Spanish Civil War’s outbreak, and calls for aid flood into the military command from the Fascist government of Nationalist Spain. So far from the Russian sphere of influence, there is little hope for the Nationalists of getting the arms or the forces necessary to sustain their war. Luckily for them, well placed spies indicate that the German Reich has sent soldiers and arms to aid their cause. 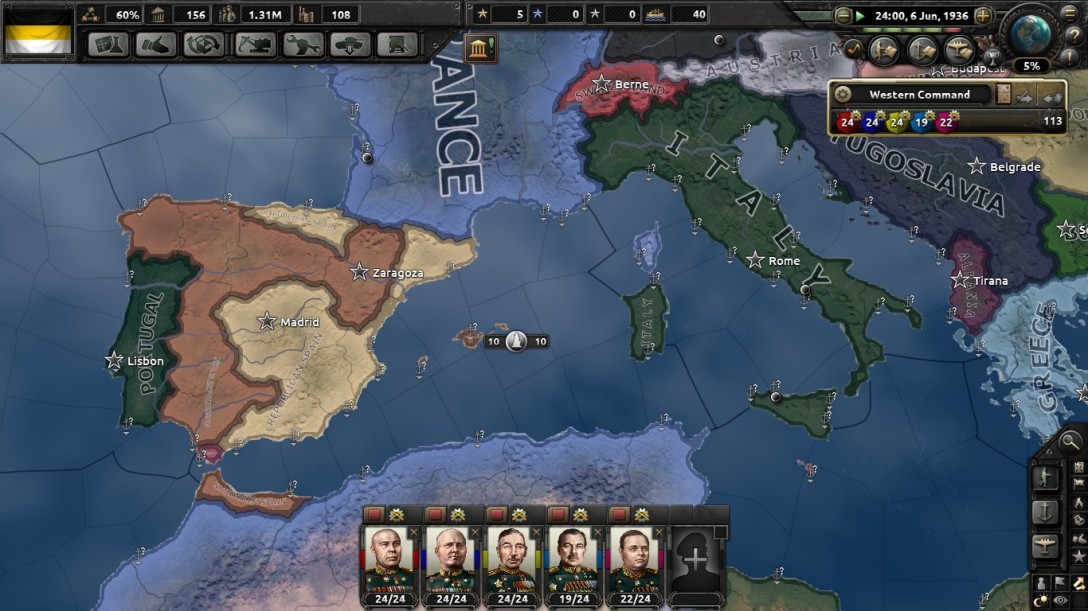 Spain, fragmented and broken, seems to be torn asunder, as Russia had felt before in 1918. 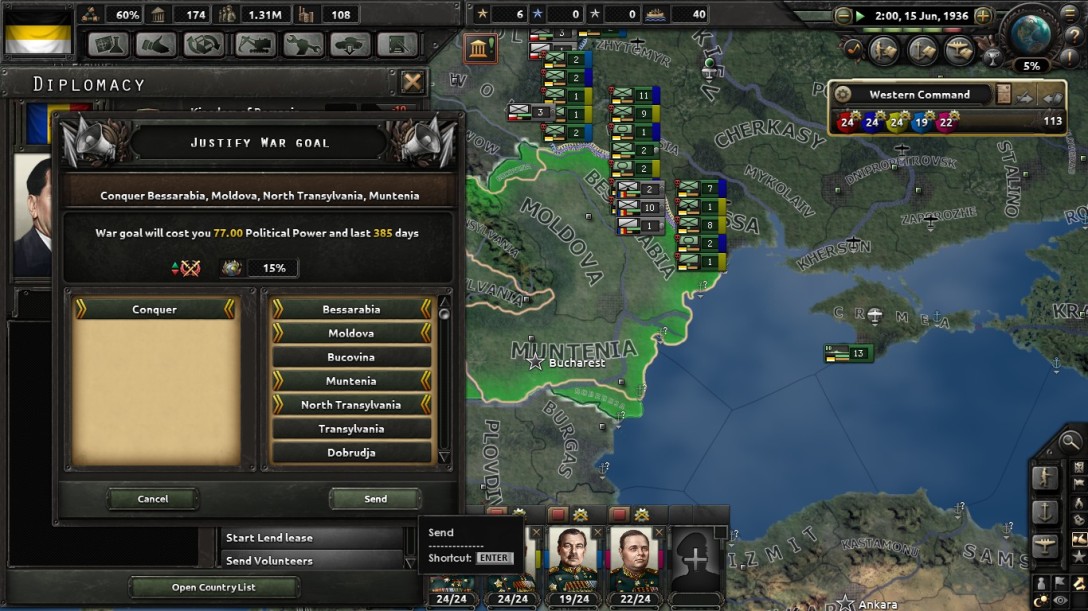 Seeing the time as ripe for initiative and conquest, the Prime Minister orders the Imperial War Council to begin making the necessary preparations for war, with the goal of reclaiming the Russian province of Bessarabia in addition to an appropriate portion of land for the Empire to expand. 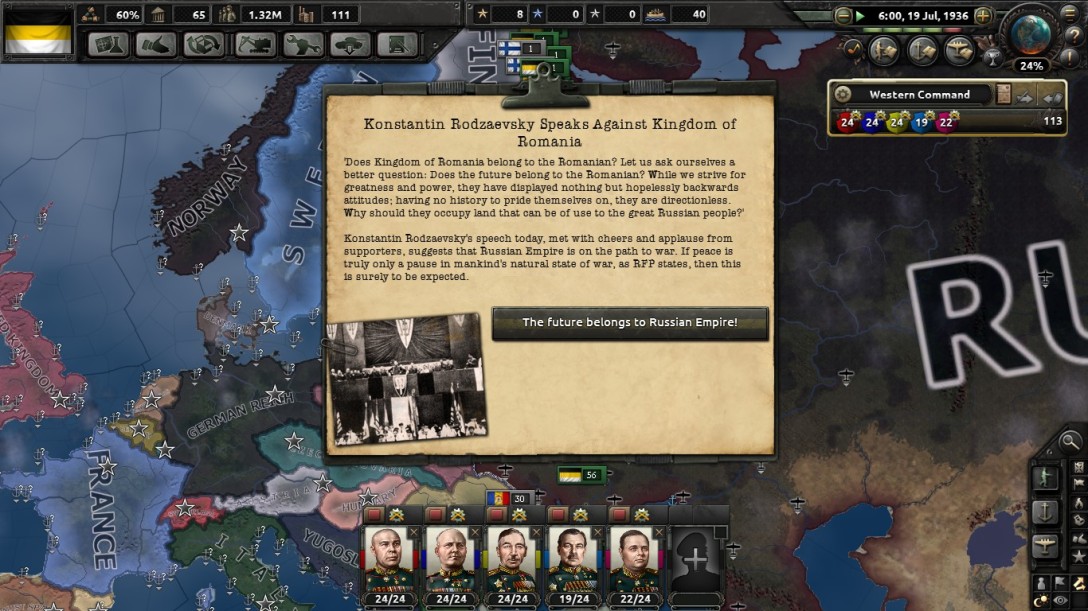 Within a few weeks, the Prime Minister has begun to give grand speeches about the threat posed to the Russian Empire, notably how allowed ethnic Russians to remain under the yoke of Romanian oppression, and how it is the manifest destiny of the Russian people that they should be united under the watchful hand of the Tsar.

Finally, our glorious Russia now feels the meddling influences of the Allied powers. With France guaranteeing the independence of the upstart nation of Estonia, and the United Kingdom doing the same with the traitors across the border in Romania, the rising bear that is our Empire has hit its first wall. Without the ability to expand to the East, the Tsar feels Russia will quickly become strangled. Trade through the Baltics will be cutoff by the United Kingdom, and with the ability to send military fleets through the Bosphorus Straits beyond our reach due to icy relations with Turkey, it seems that a course has been set, wherein the English and French shall pay the iron price for their arrogance.

Russian underperforms at the Olympics, although surprisingly Vladmir Ronaldski took home gold in the men’s triathlon, the first time that Russia has taken home a medal in this category, and a satisfying performance for the Tsar, who watched on from a private box given to him by Adolf Hitler, a leader he is quickly coming to begrudge as a man, however admire for his infrastructure projects. 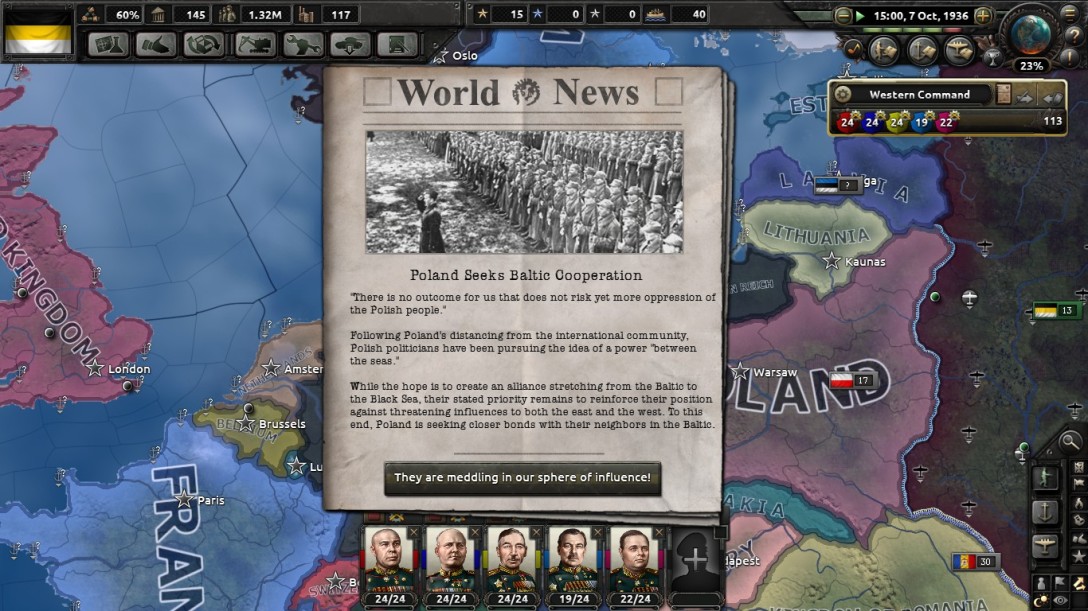 And again, it seems Poland and the Baltics put us in check with every stroke of their diplomatic sword. By banding together, they seal their fate, as the hammer of the Army shall come down on them soon enough. The Tsar is infuriated by this, flipping a small table and smashing fine china, and he demands some form of action – one for which the Prime Minister is willing to match.

Russia moves closer to war it seems, and as such the Prime Minister orders that civilian economic interests and demands be curtailed in favor of increasing the domestic construction effort, to hasten the need for factories for the coming struggle. 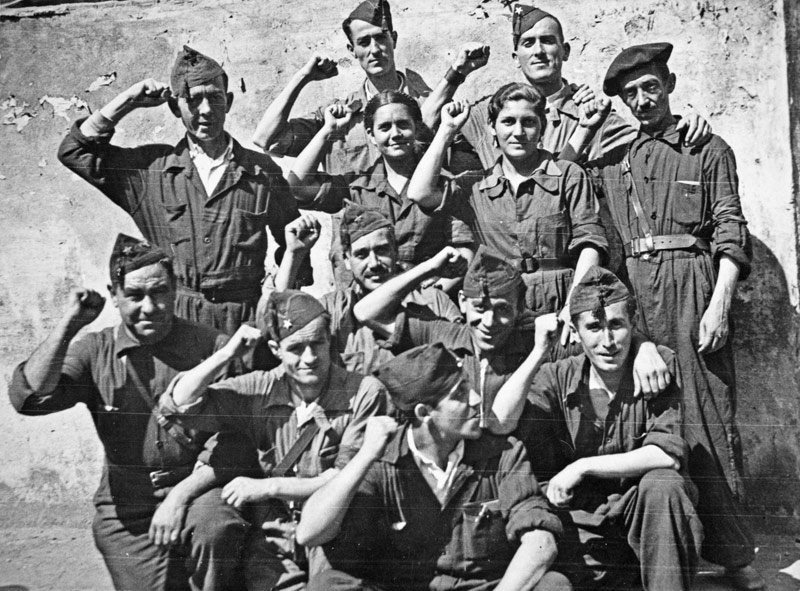 Republican soldiers put on brave faces despite the recent offensives and collapse of the Southern Spanish Pocket, resulting in the destruction of multiple divisions, causing 56,000 losses for both sides.

The Spanish Civil War goes not well for the socialist Spaniards. The collapse of the Southern pocket, cutting the country off from its supply lines up North dooms the thousands trapped in it, as to their front is fascist steel and to their backs the Mediterranean. 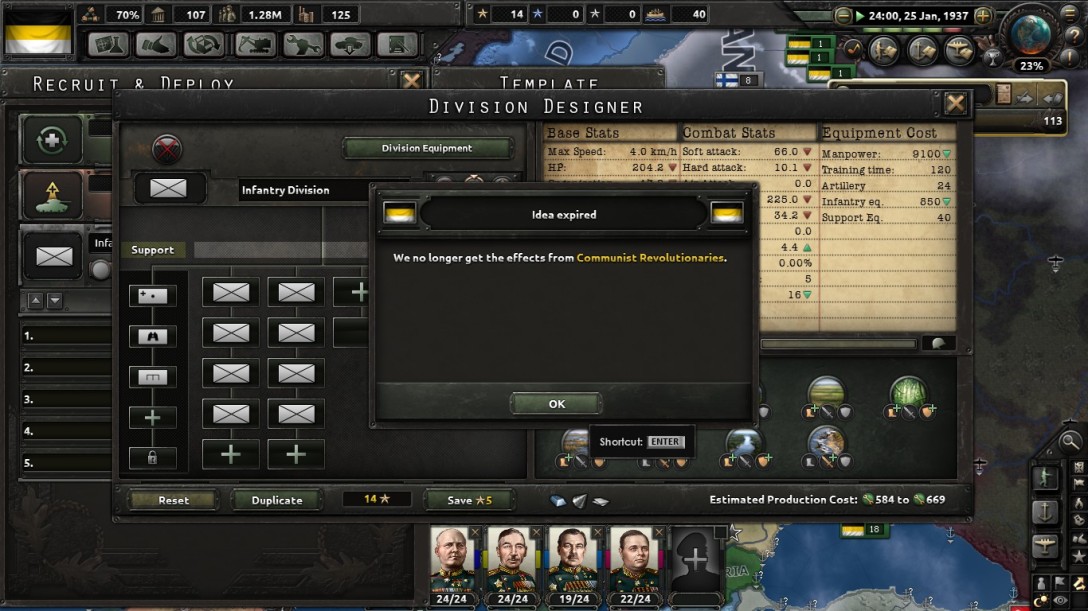 As their brothers in Spain, it seems those with a love of their country and with nationalism and patriot’s blood flowing through their veins again seize the day. The final usurpers of the Tsar’s rightful place as Head of State are rooted out and damned to the gulags of Siberia or to the penal battalions on the Japanese border. The Tsar is a kind leader, and merciful to those who have wronged him, but as his life is more precious and valuable to him than ever he refuses to allow another chance for rebellion in his nation. At this time, the Prime Minister appoints one of his closest advisors to the Imperial Council, Mikhail Kalinin. A long-time supporter of the Russian people, he is much beloved, and together he brings the Empire closer, increasing the national unity by advocating for more holidays and government-led initiatives for public welfare and happiness.

As the Russian people prepare for war, it seems those in Spain have had their fill of it. The war ends, with nearly half a million men perishing for their cause. In the end, fascism, backed by the mighty powers of Italy and Germany seems to have won. Communists flee to wherever they can find shelter, surprisingly enough many of them then land in France, beginning to advocate for the rights of the worker there. Yet this is only the beginning of Europe’s troubles, at it is far from the last time it will see war. The Tsar’s eyes have begun to look South, to the Bosphorus and Aegean, and soon the need for Russian martyrs to spill their blood for the motherland will arise.